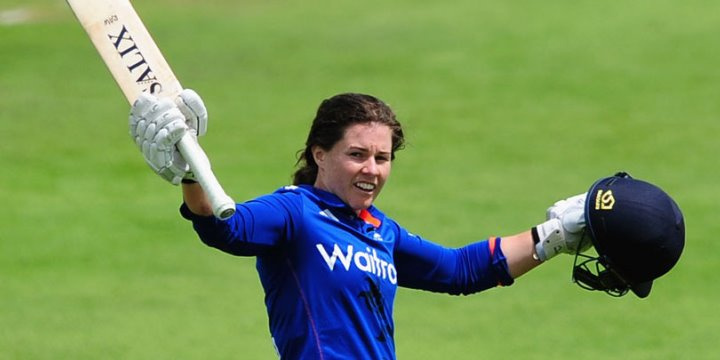 England Women’s in-form batsman Tammy Beaumont says her side aim to break records and smash boundaries when they take on Pakistan in the first match of their NatWest IT20 series at the Brightside Ground this Sunday.

The new-look side did plenty of both in the recent 3-0 One Day International (ODI) series whitewash, scoring more than 900 runs in the three matches, including making their highest score – 378-5 and hitting the most sixes in a match (11) (both in the second game at Worcester).

Beaumont led the way with scores of 70, 104, and 168 not out – the latter England’s second highest individual score of all time. Her total of 342 runs at an average of 171, was also the highest ever run tally by any player in a three-match ODI series.

To watch Tammy and England Women in action in the third ODI v Pakistan click below:

And the Kent batsman says the squad are targeting a repeat performance in the shorter form of the game.

She said: “It went really well in the ODIs not just for me but as a team as well. We put in some great performances and hopefully we will take that into the T20 format.

“We want to become one of the best teams in the world ever, break all the records and smash as many boundaries as we can. We broke quite a lot in the ODI series and we will have a look at the T20 records and see which ones we can target there.”

And Tammy says she is one of a number of players to benefit from head coach Mark Robinson’s attempt to refresh the side.

She said: “It’s been a great opportunity for the likes of myself, Lauren Winfield and Georgia Elwiss to get a go in the top three now. We’ve all got a score in the ODIs and hopefully we can take that into the T20s.

“We’ve shown our strength with our batting – our bowling has always been fantastic with Kathryn Brunt and Anya Shrubsole on the front line so hopefully we can put on a good show for the Bristol crowd.”

England’s policy of blooding young player could continue at Bristol with 17-year-old Sophie Ecclestone included in the squad for Sunday in place of Kate Cross.  This follows on from Alex Hartley making her One-Day International (ODI) debut against the tourists in Taunton earlier this week.

The 15-strong squad also sees the return of Kent left-arm seamer, Natasha Farrant.  Farrant replaces vice-captain Anya Shrubsole, who has been ruled out of selection due to a side injury.

Despite Shrubsole missing out, local interest comes in the form of her team mates Heather Knight and Fran Wilson who  - along with Shrubsole – will be appearing together  in new Westcountry-based Kia Super League team the Western Storm later this summer.