In 2021, the Gloucestershire Exiles celebrate their 50th anniversary!

The Gloucestershire Exiles is a part-social, part fundraising founded in 1971 and boasts a membership of several hundred Gloucestershire supporters from across the country and even around the world.

Originally conceived to bring together supporters from outside the county, the membership now includes many who live in Gloucestershire and Bristol who wish to enjoy the benefits offered by the Exiles.

We organise events both during the cricket season and winter months – you can read about them below. These include an Annual General Meeting at Lord’s, a day at the Cheltenham Cricket Festival for members and friends and also a 'Meet the Players' evening during one of our matches in London. Every other year we hold a Fundraising Dinner in the Lord’s Committee Dining Room.

We also produce our Exiles magazine, Outside-edge, which is the only print publication exclusively about Gloucestershire cricket. It is published twice a year and sent to all of our members.  Outside-edge keeps our members in touch with the Club news through articles submitted by members and contributions from county players past and present, cricket writers and other cricket-lovers.

How can I get involved?

Membership of Gloucestershire Exiles has an annual subscription cost of £15 (concessions offered).  Life membership is £150.00 if you are over 65. To find out more and to receive a complimentary copy of Outside-edge, please contact our Membership Secretary Matt Davies on matt.davies@bbc.co.uk or 07970 730267

Football may not have come home on July 11th but well over 100 Gloucestershire Exiles and their guests certainly did when they gathered once again in Cheltenham, always the Exiles spiritual home, for the annual Exiles Day, now well-established as one of the most popular events held at the Cheltenham Festival and this year even more special as it was the main social event in the Exiles 50th anniversary year.

Hosted in a private marquee, the gathering attracts Exiles from all corners of the country, and many from closer to home. Prior to the lunch Exiles Chair Sarah Blowen introduced the GCCC Chair David Jones who welcomed everyone and spoke of the importance of the Exiles over so many years, not only in terms of the fundraising to support the Academy but also because of the support and wider contributions that Exiles give to the Club wherever they are. Typifying the part-social, part-fundraising role of the Exiles, a cheque for £3000 was presented to David by Exiles Treasurer Jon Paine. It is hoped that, backed by the Exiles Anniversary Fund to which a number of Exiles have already made contributions, a further donation can be made later this year.

The tea interval also saw the presentation of the Exiles 2020 Player of the Year Award to Ian Cockbain, who visited the Exiles marquee, although had to remain at the boundary edge to comply with the players' "bubble" requirements

"It was a terrific day," said Sarah at the close, "and so good to have so many people together again, enjoying each other's company and the cricket in such a safe but happy environment. We are grateful to everyone for supporting the event and after all that we have been through in recent times that farewell comment of "See you next year" from the guests was even more heartfelt than before." 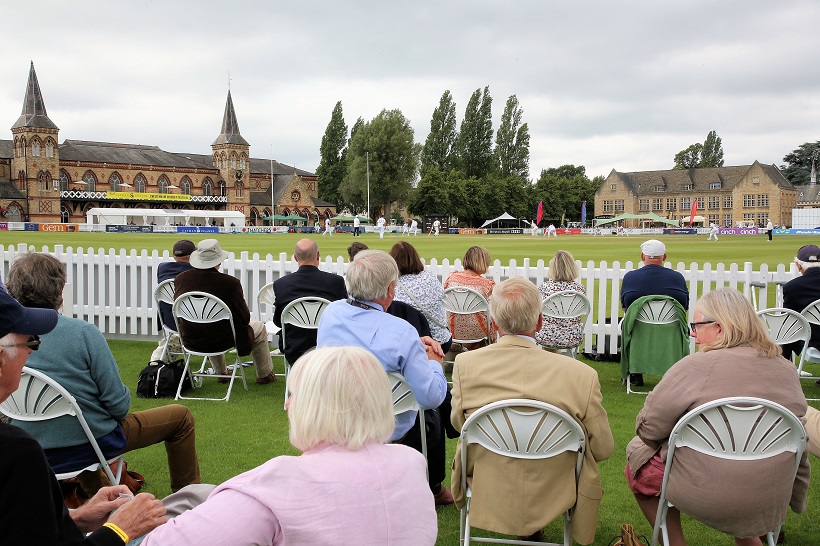 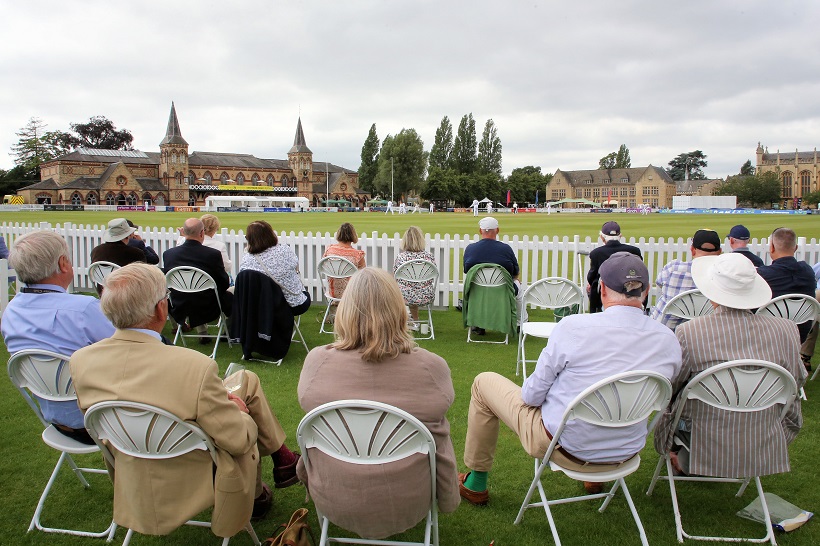 What a place to watch cricket! The Gloucestershire Exiles enjoying the 2021 Visit Cayman Islands Cheltenham Festival

To give you a wider picture of the history of the Exiles and its link with the County Club, below is a link to the 100th edition of Outside-edge which includes highlights and pictures through the years from the formation of the Exiles in 1971:

Click here for the 100th Edition of the Outside-edge.

Outside-edge editor Martin Jones welcomes all contributions and ideas for articles. We would be delighted to hear from you, especially with your 150 words. Please email him at jonitiramsen1986@gmail.com

Exiles Player of the Year 2020

The Visit Cayman Islands Cheltenham Festival gave the Gloucestershire Exiles the opportunity to finally present their 2020 Player of the Year award to the ever-popular Ian Cockbain whose efforts in the Vitality Blast competition last year did so much to take the County through to Finals Day. The presentation, carried out by by Martin Jones, Editor of the Exiles’ Outside-edge magazine, took place at the Exiles Day function and as with so many things these days had to be performed distantly with Ian remaining on the boundary edge and so still within the players’ bubble. “2020 was a tough year for the team to play in yet they all gave us so much pleasure,” said Martin. “Ian’s batting was both effective and entertaining and it was a pleasure to present the award to him. 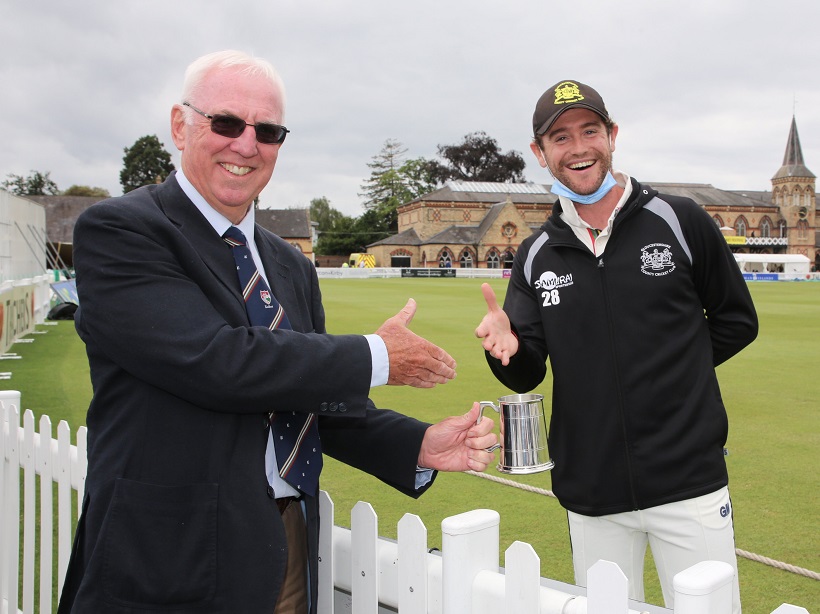 Gloucestershire Exiles launched their 2020 programme of events with another successful and thoroughly enjoyable dinner in the prestigious Committee Dining Room at Lord's. With a backdrop of a floodlit Media Centre, Exiles Chair Sarah Blowen welcomed guests to the bi-annual event. Present from Bristol were David Jones, the Club’s Deputy Chairman, Gloucestershire skipper Chris Dent, and all-rounder Ryan Higgins, all of whom happily mixed throughout the evening with Exiles and their guests.

The event has a history of attracting high-class speakers and this year's Guest of Honour was Ian Lovett who is currently ECB President and a former ECB Vice Chairman. As well as reminiscing about cricket over the years he spoke about the future direction of the game and the spirit of cricket, a theme picked up by Sarah when she thanked Ian at the close of his address.  The event typified the part-social, part-fundraising role of the Exiles. As well as the excellent meal and convivial company, the evening also included a raffle and an auction which helped to lift the profit from the evening to almost £3000. Grateful thanks were also extended Jon Paine, the Exiles Treasurer, who organised the event.