Gloucestershire Under 18s enjoyed a really successful season topping both the 50 over Royal London Cup group and the 3-day Championship group.  The team had a very experienced core of 5 to 6 players whose commitment to getting the most out of themselves and their fellow players made this season the most enjoyable I can remember, said Tim Hancock.

Their first ECB Cup match was against a strong Somerset team at Hawkesbury CC.  An excellent bowling and fielding effort bowled Somerset out for 188 as Gloucestershire cantered home by 6 wickets thanks to an aggressive 85 from skipper Will Naish.

A very dominant batting display set up an excellent victory in the next game against Wales. Max Trotman’s 94 was the standout performance. We were beaten by Devon at Thornbury CC where our middle order was blown away by a very fine spell of bowling by England U19 player Sonny Baker and despite fighting hard to defend a small total we weren’t good enough on the day.

However, the boys managed to avenge this reversal a week later with a dominant performance.   Wales were a harder nut to crack in the second match.  Stanley Brown’s 84 helped get us up to a competitive total of 254 for 9.  Wales pushed us hard all the way but our spinners bowled with control and guile and Wales were 18 runs short.  The standout spell of bowling was Owen Harris who was playing his first game for the U18s with 5 for 38.

The team won 2 out of the 3 three day matches. The first match v Wales was an excellent team win.  Ollie Meadows scored a fine 100 and a stubborn Wales were undone in the second innings by an outstanding spell of bowling from Max Shepherd (21.5 – 5 -53 – 7).  In the final game against Somerset the team showed a great deal of character to win a really close fought game by 84 runs after being 8 for 4 on the first morning.  Tommy Boorman’s carrying his bat for 84 and Max Shepherd’s 6 for 44 were the leading performers in an outstanding team effort.

The stand out performance occurred in one of the U18 Development games.  Captaining a very young team against a bigger and older Welsh side he came to the crease on with 220 runs needed on a wicket taking a lot of spin and a young middle order.  What followed was an innings of maturity and skill. His younger team-mates were encouraged through a number of significant little partnerships and he didn’t come off until the game was won.  For an outstanding 115 off 127 balls the U18s Performance of the Year was awarded to Stanley Brown.

In a year where there were a number of notable performers, this player should look on his season with a lot of pride. He was the heart beat of the team.  Through his energy and work rate in the field, his care to his team mates off the field combined with some really outstanding spells of left arm spin this award goes to a player who has been an ever present in Gloucestershire Age Group Cricket since he first played for the Under 10s.  The U18 Player of the Year was awarded to Max Shepherd. 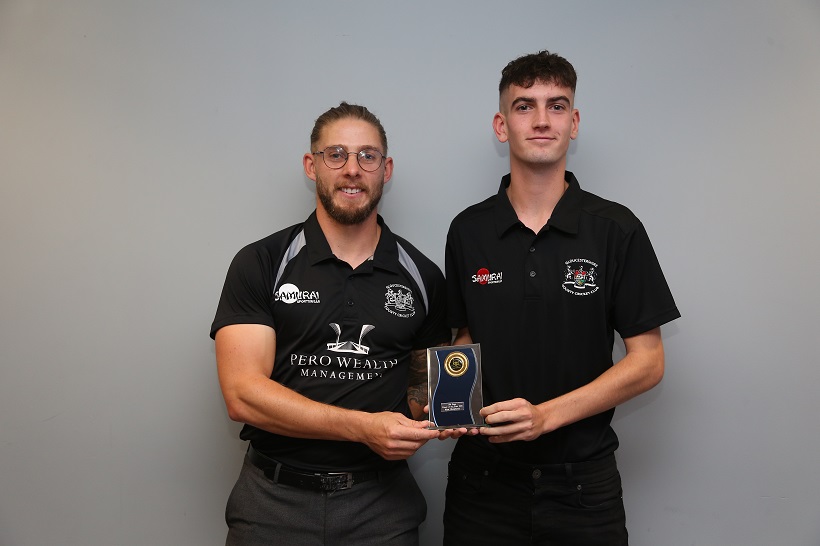