The 28-year-old top-order batsman, who is currently leading the Windies in the final match of their Test series against Sri Lanka in Antigua, will depart for Bristol at the conclusion of the match.

Subject to Covid restrictions and quarantine rules upon entering the UK, Brathwaite will be available to Interim Head Coach, Ian Harvey for the opening eight matches of the County Championship, only missing the final two group matches at Cheltenham in July.

Whilst he could feature in the opening match of the season against Surrey, it is thought likelier that he will make his debut against west country rivals Somerset in the second round of fixtures.

Kraigg expressed his joy at signing for Gloucestershire:

“I truly look forward to the opportunity to represent Gloucestershire. I have always enjoyed county cricket and cherished the times I’ve been able to play in England.

“I’m excited to come to Bristol and do my best for the team, the Club and of course the Gloucestershire supporters.” 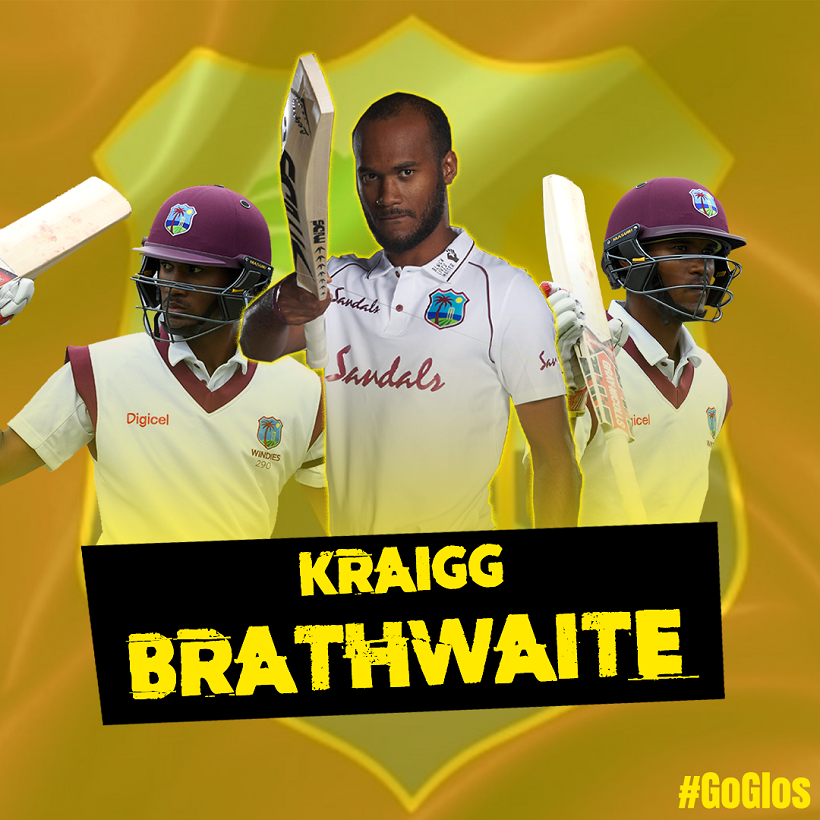 Fresh from scoring 126 in the first innings of West Indies Test match against Sri Lanka, his ninth Test century, Brathwaite will bring with him a decade’s worth of experience opening the batting in the longest format of the game.

This year, under the captaincy of Brathwaite, West Indies have won two Tests against Bangladesh and drawn the opening Test of their two-match series against Sri Lanka. Currently leading the second match by 104 runs with Sri Lanka eight wickets down in their first innings, Brathwaite’s side are on course for another positive result.

Speaking on the imminent arrival of Brathwaite, Ian Harvey said:

“To be able to bring somebody in who has played the number of Tests Kraigg has, and now as captain, is going to be a massive boost for the guys in the dressing room. He will obviously add quality to the team now but also moving forward as a group, his presence here will be extremely beneficial for us.

“Kraigg has been on our radar for some time now. The way he goes about playing the game really impresses a lot of people at the Club and it’s fantastic that we’ve been able to bring him in for the early part of the County Championship.

“He opens the batting for his country so it would be hard to look past an opening partnership of Brathwaite and Dent but we do have a lot of quality players that will fit well around him.”

Brathwaite, a right-hand bat, will slot in at the top of the order, complimenting the left-handed bat of Club captain Chris Dent. Both men have equally impressive records in first-class cricket with over 40 centuries and almost 20,000 runs between them.

Occasionally called into the bowling attack, Brathwaite has shown himself as a capable off-spinner with best bowling figures of 6/29 in Test cricket. In West Indies’ second win over Bangladesh in mid-February, Kraigg dismissed both openers Soumya Sarkar and Tamim Iqbal - the former with his first delivery of the second innings.

Kraigg has previously turned out in the County Championship for Yorkshire, Nottinghamshire and most recently Glamorgan. His last spell in the UK yielded an average of 55.33 over four games for the Welsh side including an unbeaten 103 in the last match of the 2019 season.

Supporters of The Shire will be hoping the Barbadian can replicate his most recent form in the format, a career best 246 against New Zealand A, in the early stages of the County Championship.

Gloucestershire’s LV+ Insurance County Championship campaign gets underway on 8 April with the visit of Surrey to Bristol. You can watch all the action from Bristol County Ground via our Match Centre HERE