Following last summer’s shortened Vitality Blast the competition returns to a 14-match group stage competition this summer with the counties split into North and South groups.

Here are some common questions about the Vitality Blast to ensure you are across all the key details:

WHEN WILL THE VITALITY BLAST START?

This summer’s Vitality Blast will begin on Wednesday 9 June. Champions Notts Outlaws start their title defence on the opening night away to 2018 winners Worcestershire Rapids at New Road in front of the Sky Sports cameras.

WHAT IS THE FORMAT THIS SUMMER?

The Vitality Blast returns to a 14-match group-stage format with the First-Class Counties split into traditional North and South Groups.

Each county will therefore play seven matches at home, and seven matches away, with the top four counties in each group progressing to the quarter-finals.

The quarter-finals will be seeded with the higher-seeded team set to host their quarter-final. So, as an example, the top team in the North Group will host the fourth-ranked team from the South Group in the quarter-finals.

The four winners of the quarter-finals (24-27 August) progress to Finals Day. Finals Day will be staged at Edgbaston on 18 September.

All knockout matches will have a reserve day should that be required.

WHICH COUNTIES ARE IN EACH GROUP? 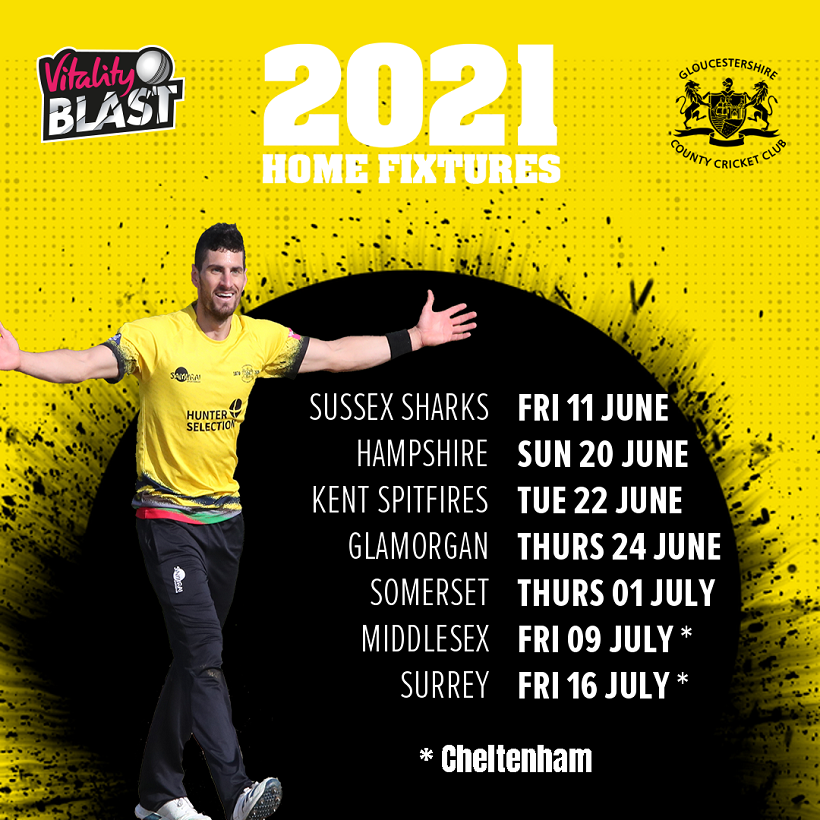 Following last year’s streaming of matches we are also set to offer a full programme of live-streamed (non-broadcast) matches on our Match Centre, which you can sign up for free here.

Sky Sports is set to broadcast matches throughout the group stage including four matches over the opening four days of the tournament. The four quarter-finals are also set to be broadcast on Sky in addition to all the Finals Day action on 18 September.

CAN I BUY TICKETS NOW?

From Monday 1 March, we will be running a ballot for 2021 Gloucestershire Cricket Members, previous T20 ticket buyers, supporters who have rolled over their 2020 tickets and the general public.

For the 2021 cricket season, Gloucestershire Cricket Members will be prioritised and at the front of the queue should there be any capacity restrictions.

If you would like to become a Gloucestershire Cricket Member in 2021, please click here and purchase membership today.