Two weeks to go until Blast

Our Vitality Blast campaign gets underway in just two weeks time when Gloucestershire take on local neighbours Glamorgan at the Fergal O'Brien Cheltenham Cricket Festival on Friday 19 July. This epic encounter between the two sides is already sold out!

The good news is that we still have limited availability for the second Blast match at the Festival against Middlesex on Thursday 25 July at 2.30pm - Buy your tickets here

In total, Gloucestershire will play seven Vitality Blast matches at home, five in Bristol and two in Cheltenham.

The first match at the Bristol County Ground takes place on Friday 2 August when Gloucestershire take on Essex Eagles!

The second Vitality Blast match at the Bristol County Ground takes place on Sunday 4th August against Sussex Sharks. This match is our Family Day which is a fantastic opportunity to bring children along to an action-packed match of cricket and entertainment.

Tuesday 13th August sees Gloucestershire take on Hampshire in a double headed fixture, with Western Storm taking on Loughborough Lightning in the Women’s Kia Super League in the afternoon.

Gloucestershire welcome local rivals Somerset for the final home group T20 fixture of the competition at the County Ground.

The visitors have failed to defeat Gloucestershire at The Bristol County Ground in their last three attempts. Don't miss out on Gloucestershire looking to make it four wins in a row at home!

Hit your summer for six and be part of the action!! 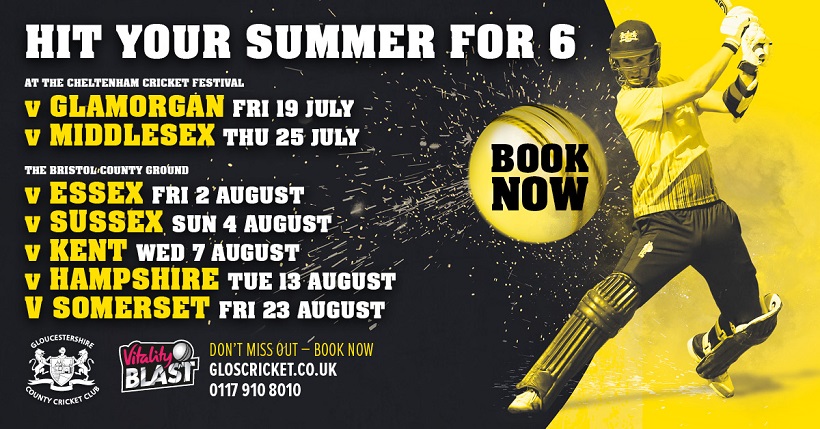