The seemingly never-ending streak of important matches continues for Gloucestershire as they travel to Taunton to take on rivals Somerset in a must-win encounter.

Having yo-yoed in and out of the top four places in the South Group, Gloucestershire head into their final group game this Sunday still with their destiny in their own hands. A win sees the Club reach the quarterfinals of the Vitality Blast for the fourth season running and could even secure a home quarterfinal match depending on results elsewhere.

The team that stands in front of them, the old rival Somerset who this season beat The Shire in Bristol for the first time in T20 competition since 2015.

Gloucestershire had the chance to seal a place in the final eight on Friday against Surrey at Cheltenham but the London side were motivated by a must-win scenario of their own and as a result sit one point ahead of The Shire.

Ian Harvey will be hoping his side can take a similar approach to the match at Taunton although getting revenge against local rivals should be reason enough to get excited.

Gloucestershire will be looking for at least one of the top order batters to produce a match-winning innings. Kent, Sussex and Surrey have all recorded at least 10 half-centuries while Gloucestershire have made just six so far this season.

What that does indicate is that The Shire potentially have the greatest depth in batting and should one of Hammond, Howell, Cockbain or Phillips kick on, there will be plenty of reinforcements to follow.

David Payne is continuing to recover from a minor back injury suffered while with the England ODI squad last week. Should he be fit enough to play, that will give Harvey the option to feature either Graeme van Buuren or Dan Worrall in the starting XI.

James Bracey will not be available for tomorrow's match as he must observe a period of isolation. 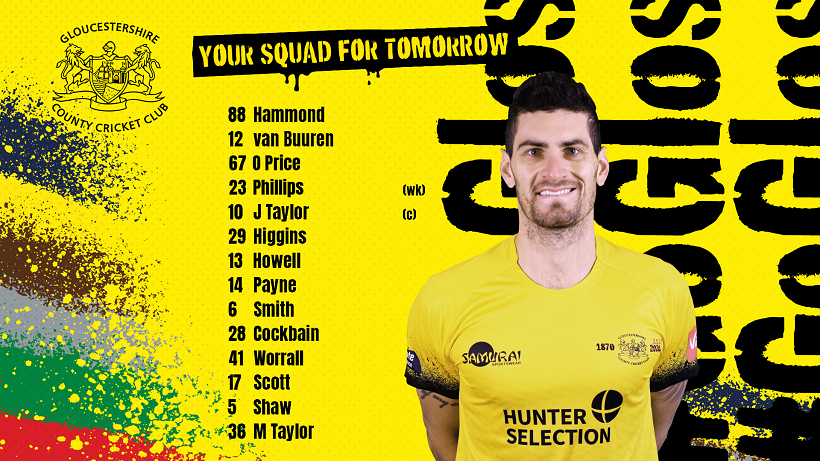 Somerset will once again be without Tom Banton and Lewis Gregory who are both on international duty with England. Red-ball captain Tom Abell is also out with a hamstring injury meaning Craig Overton will captain the side for the third time this season.

The team from Taunton will be coming into the game on a high after securing a pace in the quarterfinals with an emphatic victory over Glamorgan, their first time in the last eight since 2018.

Devon Conway led the way in Cardiff with an unbeaten 70 continuing his fantastic form for both Somerset and New Zealand. That was the fourth time in seven innings that he had surpassed 50 runs in this year’s Vitality Blast.

Lewis Goldsworthy also chipped in with three wickets for just 14 runs. He and van der Merwe will be at the heart of Somerset’s spin attack while Overton and de Lange will bound in to test the batters with pace.