After narrowly missing out on qualification to the knockout stages of the Royal London One-Day Cup, we look back at the most memorable moments of the tournament.

Gloucestershire started their campaign in the South Group with a convincing 147 run victory over Surrey.

Last season's Division 1 Champions were dismissed for just 88, using up fewer than half of their allocated overs. Gloucestershire's total of 235 centred on a second wicket stand of 152 between skipper Chris Dent (75) and Gareth Roderick (74), before the remaining eight wickets fell for 79 runs.

Gloucestershire got off to a quick start with Dan Worrall's third delivery, Mark Stoneman being bowled behind his legs after stepping too far across. Will Jacks put bat to ball forcibly until treading on his leg stump to give Worrall his second wicket, and Chris Liddle's introduction - saw him remove the dangerous Jason Roy for 17 by reacting quickly to snaffle a return catch. Tom Smith and Chris Liddle both took three wickets in the match and helped guide Gloucestershire to a comfortable opening victory in the competition.

An unbelievable performance by the Gloucestershire boys who bowl Surrey out for 88 runs!🔥🔥

Take a look at the victory sealing wicket by Tom Smith below!#GoGlos💛🖤 pic.twitter.com/X4AXWRzLhm

Roderick’s match to remember against Kent

Gloucestershire’s second home victory in the competition was one dominated by wicketkeeper and batsman Gareth Roderick who made an impressive century as well as doing his part behind the stumps.

Roderick caught Kent skipper Joe Denly behind the stumps off the bowling of David Payne before superbly smashing down the stumps at the strikers' end to run out Heino Kuhn for 24.

Gareth Roderick made his first List A hundred for four years and in the process, he passed 1,000 List A runs after leading Gloucestershire to a superb six wicket victory in front of the Bristol crowd. Gareth’s century came off 80 balls, smashing eight 4’s and two 6’s.

A seventh wicket stand of 49 between Jack Taylor and Ryan Higgins saw Gloucestershire home by four wickets as they successfully chased a target of 243 against old rivals Somerset to make it three home wins from three in the competition.

Taylor, who finished 43 not out, also added 83 with Graeme van Buuren (61) as Gloucestershire's innings followed a similar pattern to Somerset's earlier in the day. Graeme van Buuren hadn't made a List A half-century since the game against Glamorgan in 2017, but here his scuttling running and workmanlike shots - many off the back foot - kept Gloucestershire neck and neck with Somerset's run rate.

On a used pitch, Somerset made 242-9 batting first, Lewis Gregory making 52 from 33 balls down the order after a period of 27 overs in mid innings had passed without a boundary. Benny Howell finished with three wickets, and there were two each for Tom Smith and David Payne on a day when Gloucestershire kept themselves in contention for a place in the knockout stages. 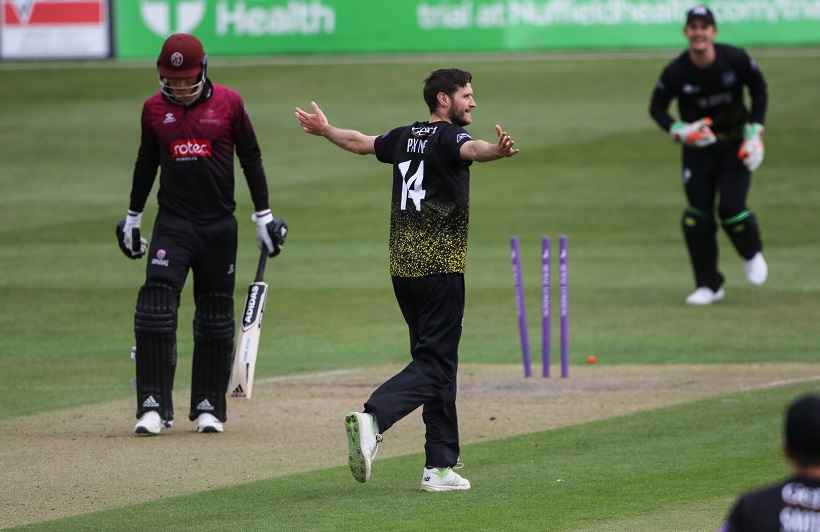 Batsmen shine against Sussex at Eastbourne

Gloucestershire’s batsmen put on an exhibition display against Sussex at their out ground in Eastbourne.

Captain Chris Dent and Miles Hammond put on a superb opening partnership of 110 runs with Dent the first man to fall on 46. Miles Hammond continued, reaching his first List A half century with the aid of seven fours and a six, and he found a reliable foil to keep the score ticking in Gareth Roderick (53), particularly when spinners Beer and Briggs were bowling in tandem.

Unfortunately, Hammond didn’t reach his maiden List A Century after attempting to go for the maximum, his shot going straight to David Wiese while on 95.

Jack Taylor came in and went crazy with the bat, scoring an unbelievable 69 runs off 26 balls, crunching two 4’s and a whopping eight 6’s, helping coast Gloucestershire to 335 for 6 in their innings.

JACK TAYLOR IS CRUNCHING THEM EVERYWHERE!!

He smashes a 6⃣ to reach his half century!

James Bracey stole the limelight for Gloucestershire in the final group match of the competition against Essex at Chelmsford.

In the Gloucestershire innings, Bracey led the team to a four-wicket victory, scoring an impressive 113 off 93 balls which included four 4’s and five 6’s.

Relive @bobbybracey25 maiden List A century for Gloucestershire in the fantastic victory over @EssexCricket yesterday! 🏏💯

Briefly Essex were on top as van Buuren, Jack Taylor and Higgins departed for the addition of only 29 runs but with Bracey entrenched, Benny Howell walked to the wicket alongside runner Miles Hammond with 86 still needed from the last 9.5 overs.

Two boundaries by Howell off Westley gave the pair a start, and Bracey struck sixes off Porter, Coles and Bopara to complete a well-constructed hundred from 86 balls to take Gloucestershire to the brink of a victory, sealed by Howell's powerful pull to mid-wicket, also off Coles. It had been a spirited effort to win the game and finish the South Group on 10 points, only for the margin of the results across the eight matches to end any further interest until next season.

What a way to win the match, an injured Benny Howell smashes it for six as Gloucestershire win by 4 wickets👏👏

Richard Dawson’s thoughts on the competition

We caught up with Head Coach Richard Dawson after narrowly missing out on advancing to the next stage in the tournament.

Dawson expressed his delight with the team, he said: “We played some very good cricket and beat some good sides with international players, including first division teams.

I'd like to think we have learned a lot - people like Miles Hammond and James Bracey have come into the side and performed, and we've done it with a small group.

The pleasing thing is we've showed an improvement, especially in the last two games (Sussex & Essex away) where previously we had come unstuck in certain situations but in those matches it looked like we had taken things on board and played some good cricket.”

The Club would like to thank all of it's followers for their continued support throughout the competition and rest assured, there will be more success on the horizon to shout about.