Following a road trip in which Gloucestershire picked up three points from a possible four having batted just 18 overs, Ian Harvey’s side return to Bristol County Ground where they will face Hampshire Hawks this Sunday.

Hampshire, who have the undesirable task of starting their Vitality Blast campaign with seven away matches due to the World test Championship being played at The Ageas Bowl, suffered the same fate as Gloucestershire on Friday with their match being abandoned without a ball bowled.

While Gloucestershire will feel they could have come back to Bristol with more than a point from Friday’s abandoned match at Chelmsford, they could benefit from the extra day’s rest.

Ryan Higgins passed a fitness test prior to the match against Middlesex but will have more time now to recover from a fractured toe suffered against Glamorgan. James Bracey, who didn’t feature at Radlett, will also profit after returning to the Gloucestershire squad from making his first two appearances for the England Test team.

Ian Cockbain will be feeling confident heading into the game against the Hawks after making the Club’s first T20 half-century of the season. He made 62 not out against Middlesex and struck the match winning six before the teams were called off for bad light.

Despite coming out on top in the last match between the two sides in 2019, The Shire have historically struggled against Hampshire winning on only one other occasion in nine attempts.

Ian Harvey has named an unchanged squad for tomorrow’s match: 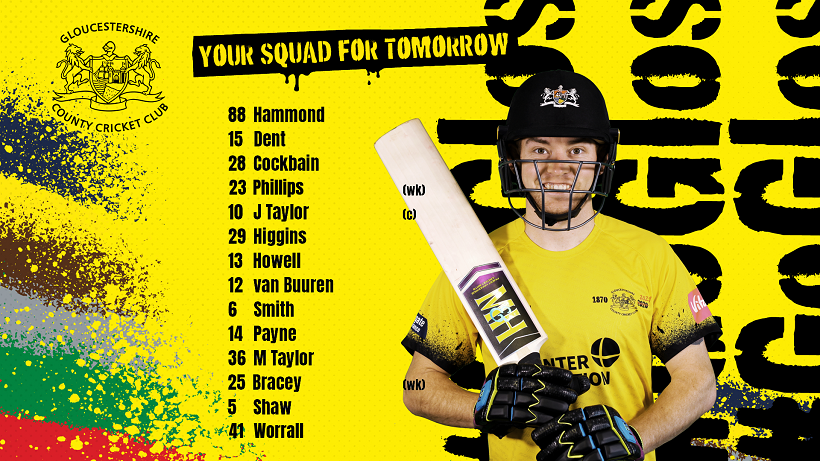 The Hawks suffered defeat in three of their opening four matches with the only win coming against fellow strugglers Essex Eagles. Chris Wood and Liam Dawson played a key part in making sure Essex couldn’t reach Hampshire’s total of 155, going for just 32 runs from a combined eight overs.

The in-form Weatherley has top scored so far for the Hawks with 134 runs at an average of 33.50. James Vince and Australian D’arcy Short have also surpassed 100 runs but theu are yet to see a batter reach 50 in this year’s T20 competition. They’ll be hoping Short in particular can kick on having scored 483 runs for Durham in the 2019 Vitality Blast.

Mason Crane has been the most effective with the ball taking eight wickets at a strike rate of 11.2; five more wickets than any other Hampshire bowler.