Gloucestershire Cricket together with Rainbow @ Grief Encounter raised over £10,495 in August along with increased awareness for the Bristol based charity with more still to come.

Rainbow Day was a charity day held on August 4th at The Bristol County Ground as Gloucestershire faced Sussex Sharks in the Vitality Blast.

Limited-edition Rainbow Day shirts and caps were sold in aid of the charity with the shirts selling out online and in the Club shop on the day with 100% of proceeds going to the charity.

Raffles for the signed Rainbow Day shirts of Michael Klinger, Andrew Tye and James Bracey took place on the day as well as bucket collections which raised an additional £2,000.

“The Rainbow Centre are the real winners of this one. It’s been amazing to spread awareness about the charity. People may not have heard about the Centre before, but they certainly will now. It’s fantastic to have been a part of this because they’ve given so much to us as a family. Rainbow Day was really well supported and everyone got into the spirit of the day which was lovely.” 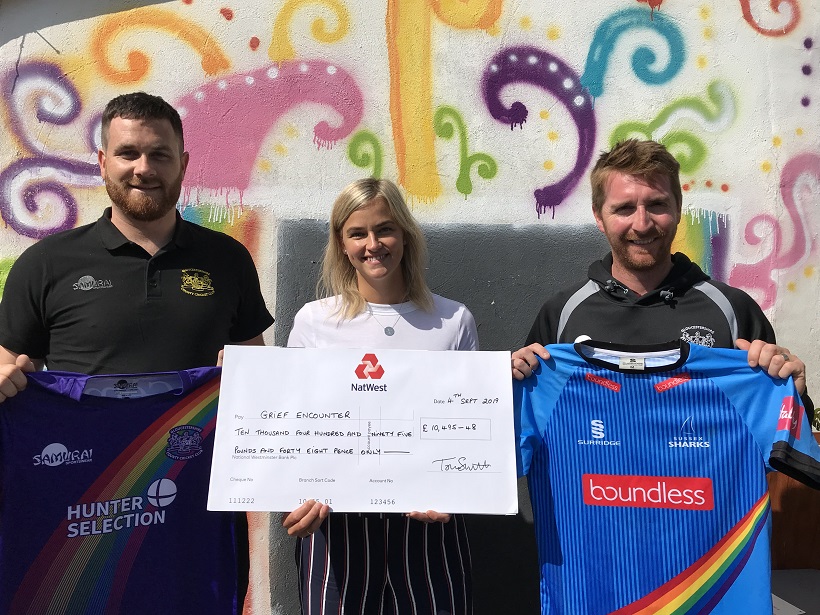 “Rainbow Day was a huge success made possible by many different moving pieces. We’d like to thank Tom’s former Club Sussex for being so involved and not only wearing a bespoke rainbow shirt of their own but for conducting a collection at their home ground in aid of the Bristol based charity.

Rainbow @ Grief Encounter was seen on ITV, BBC and across all our social media channels spreading awareness of the great work they do. The positive energy in the ground on the day and the feedback we received from it is really heartwarming.”

Sussex Cricket and Sussex Cricket Foundation held a bucket collection and shirt raffle when Gloucestershire travelled to Hove to face them in the last Vitality Blast group match. £1,800 pounds was raised on the day thanks to a huge effort from every involved in organising the collections.

Grief Encounter, formerly The Rainbow Centre for Children, set up at the Bristol County Ground on Rainbow Day to talk about what the charity does and who they help. Many supporters showed tremendous generosity and donated thousands to the charity.

‘The Gloucestershire Cricket Club have done so much for us this year and we can’t thank them enough. From donating match tickets to raising over £10,000 – the enthusiasm they have shown for supporting us has been heart-warming and the funds and awareness they have raised along the way are going to make a difference to our charity and the bereaved children of Bristol and the surrounding areas for years to come. Thank you!’