Gloucestershire return to Royal London One-Day Cup action on Friday when they play Sussex Sharks at the County Ground in Hove.

Tuesday saw Glos slump to an eight-wicket defeat against Warwickshire, where the on-field defeat was softened by the Club’s fantastic Community Day during what was the final fixture of the Visit Cayman Islands Cheltenham Cricket Festival.

The cricket, however, frustrated fans as fifties from Ben Wells and Zahar Gofar were unable to prevent defeat as Warwickshire coasted home with 11 overs to spare.

The form of 22-year-old Wells will encourage fans, who followed up his century against Wiltshire, opening the batting with Chris Dent.

Sussex suffered the same fate as The Shire in their opening match away to Nottinghamshire losing all 10 wickets for 225, chasing Notts’ 290.

Tom Alsop top scored for the Sharks scoring 75 off 70, and is joined in the middle order by Indian great Cheteshwar Pujara and 17-year-old Dan Ibrahim.

The Sussex squad also includes England seamer Ollie Robinson, who will be hoping to play after missing the Royal London opener against Notts.

An average Sussex squad age of 24, including 34-year-old Pujara, ensures there will be a host of young stars on show from both sides.

Marcus Harris will look to improve on his single-digit score at number three, while Josh Shaw’s pace could trouble a Sussex top four that all fell cheaply to seam against Notts.

Here's your 14-man Gloucestershire squad that travels to Sussex: 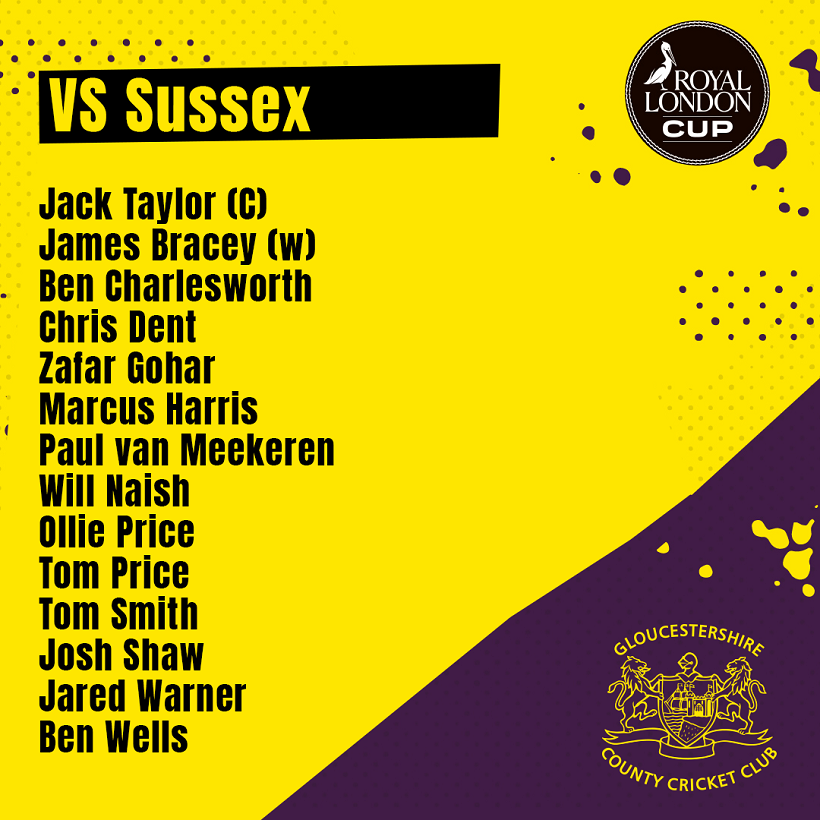 Glos have beaten Sussex in four of their past five one-day matches, the most recent being a rain-affected encounter that saw Tom Smith lead the attack taking 3-28, propelling The Shire to a fantastic victory.