Glos are back in T20 Blast tomorrow evening when they make the trip down the M5 to face Somerset.

Gloucestershire have added Mohammad Amir to the travelling squad after the former Pakistan international re-joined the club to play in the remaining T20 Blast games on Thursday afternoon. Coach Dale Benkenstein has also welcomed Chris Dent back into the T20 squad after his injury lay-off.

The two sides met earlier in the month when Somerset picked up the win thanks to a match winning knock from Roelof van der Merwe.

After losing the toss Glos were asked to bat first and started the game quickly with Miles Hammond hitting four sixes off the first over. With the Shire on 61/1 after the five overs the rain hit BS7 and the game was halted until 8:45pm with each innings reduced to 10 overs. Glos managed to reach 101/5 from their 10 overs meaning Somerset’s revised target was 112.

The visitors slumped to 55/7 before van der Merwe hit an unbeaten 48 from just 15 balls to see Somerset across the line to an unlikely victory.

Last time out in the Vitality Blast Shire produced a remarkable fightback to win away at Sussex Sharks.

At the half-way stage Glos were 49/4 but with Glenn Phillips and skipper Jack Taylor in the middle the Shire fancied their chances of posting a competitive total. Phillips top scored with a 53-ball 66 and with Taylor offering him great support with 36 from 31 deliveries Glos finished their innings on 145/6.

The Glos bowlers stuck to their task wonderfully and produced an amazing comeback to secure victory in the final over. The home side looked certain to cruise to the winning target when they reached 118/3 in the 14th over but the Shire had other ideas and took eight wickets for just 23 runs in six overs.

Here’s the Gloucestershire squad to face Somerset in Taunton: 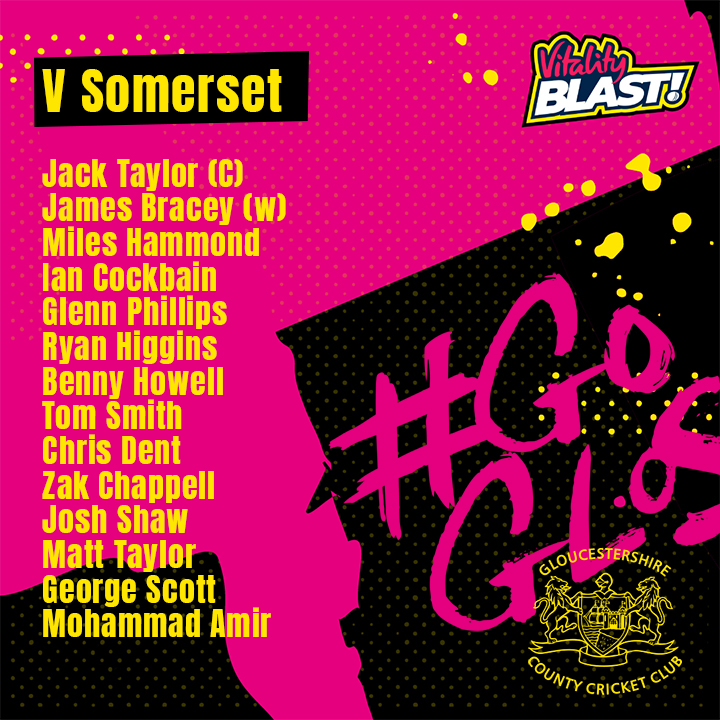 Glos have won 14 of the matches and Somerset have won 16 with seven games being abandoned and two games have ended in no results.

Somerset are reporting that tickets are sold out for the fixture.