Gloucestershire make the short trip to Taunton for the first local derby of the Vitality Blast with their eyes firmly set on the quarter-finals.

The Shire could make it five wins in a row in the competition with a first T20 victory over Somerset at Taunton since 2016. Since Richard Dawson took charge of Gloucestershire in 2015, The Shire have won six of eight games against their local rivals with the teams splitting two matches at Taunton.

After a convincing win at Northants yesterday, Gloucestershire have become the team to beat in the Central Group while Somerset are in dire need of two points after a home loss to bottom side Worcestershire.

Despite a week break between T20 contests, Gloucestershire continued right where they left off against the now second placed team Steelbacks.

Chris Dent made his third half-century in five appearances after four years out of the shortest format. Ian Cockbain edged closer to Michael Klinger’s T20 runs record with a score of 40 and Jack Taylor saw out the Gloucestershire innings with help from Higgins, Bracey, Scott and van Buuren.

Their score of 185/6 was the fourth consecutive match in which their run rate exceeded nine runs an over. No team this season has been able to do the same against the Gloucestershire bowlers.

Tom Smith and Ryan Higgins both added one wicket to their totals for this year’s Blast taking them to 10 wickets apiece. Only one other bowler (Tom Bailey, Lancashire) has reached double figure wickets.

Graeme van Buuren was the beneficiary of sound spin bowling yesterday picking up a career best 3/15 in the black and yellow of Gloucestershire. The middle overs when he and Smith take over the bowling continue to be a thorn in the oppositions’ side with runs proving very hard to come by.

Benny Howell has been named in the squad for the first time since a torn hamstring in last year's Blast ruled him out for the rest of the 2019 season. He has spent over 400 days recovering and has been deemed available to play by the Gloucestershire Cricket medical team.

Richard Dawson has named a 14-man squad for tomorrow’s clash with Somerset: 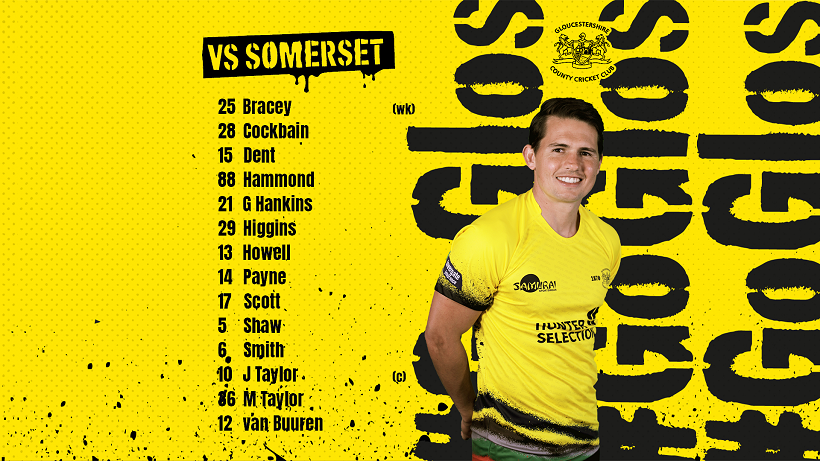 Somerset have yet to reach the same heights of their Bob Willis Trophy success and are now in grave danger of missing out on the next stage of the Vitality Blast.

With three of their remaining four matches coming against the current top two teams in the Central Group and a Bob Willis Trophy final at the end of the month, it appears to be a make or break match for Somerset.

Club captain Tom Abell has been the highest run scorer for our neighbours with 164 runs but current T20 captain Lewis Gregory has only averaged 10 runs in his three appearances.

24-year-old Ollie Sale has certainly made an impact in his first full competitive season with Somerset after failing to make an appearance in any format since 2016. He’s taken 6 wickets but has been one of Somerset’s more expensive bowlers.

The match taking place at Taunton will be broadcast live on The Somerset match centre and is scheduled to begin at 2pm.