A crucial match against Northants Steelbacks awaits Gloucestershire in the Vitality Blast tomorrow as they look to continue their scintillating T20 form.

A win for the Steelbacks coupled with positive results elsewhere could see them go four points clear at the top of the Central Group. A win for Gloucestershire on the other hand would put them level on points with Northants and in a good position to qualify for the knockout stages of the competition.

Since losing to Glamorgan in the second scheduled match of the season, Gloucestershire have transformed into one of the most well-rounded looking squads in the competition.

The top order has looked splendid with two 80-plus scores in the last two matches courtesy of Ian Cockbain and Chris Dent. Their high scoring has been backed up by Miles Hammond who has contributed two 40-plus knocks that have kept the runs coming from the opposite end.

Ryan Higgins, Jack Taylor and James Bracey are the only other batsmen that have been called into action since the first match, adding 140 runs cumulatively and generally closing out the innings for The Shire. Between them, five of their seven innings have finished not out.

On the other side of the ball, Tom Smith and Ryan Higgins are joint second for wickets taken in the Vitality Blast with nine apiece at a strike rate of 10. Only Tom Bailey of Lancashire has taken more T20 wickets this season (10).

David Payne has also found some rhythm in the competition after reaching his 100th T20 wicket for Gloucestershire. In the las three matches he has taken 5 wickets in 10 overs at a strike rate of 12.

Gloucestershire have named a 13-man squad for the trip to Northamptonshire: 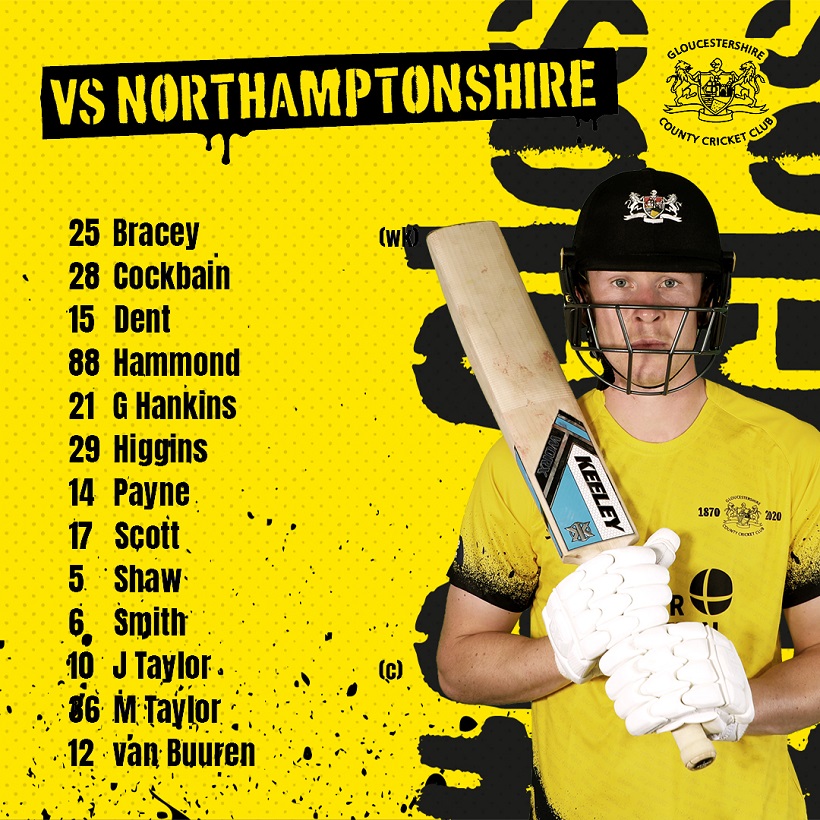 Northants have had the ideal start to their Vitality Blast campaign with four wins from four. Their highest run scorer, overseas signing Paul Stirling, has shown his ability to score in bunches. He hit 80 not out off 48 balls in their opening match but has yet to replicate anything like this since.

Both he and his fellow opener Richard Levi are among the biggest hitters in the competition and both rank in the top ten for sixes made. Ian Cockbain tops this list with 10 maximums so far.

Stirling has also chipped in three wickets in six overs but the Steelbacks bowling attack has been anything but short of wickets with Sanderson, White, Buck and Glover have all taken at least five wickets.

Josh Cobb has only taken one wicket in the tournament but has been one of the most economical bowlers in this year’s Vitality Blast. He has given up just 4.90 runs per over, only bettered by five other bowlers.