Gloucestershire travel to Emirates Old Trafford to take on Lancashire in the hunt for their first win of the season in Division One of the LV= Insurance County Championship.

Dale Benkenstein’s side go into the match on the back of a battling performance against Yorkshire at the Seat Unique Stadium in Bristol, a contest that the away side ended up winning by six wickets in the final session of the final day’s play.

Lancashire, meanwhile, will be looking to maintain their winning start to the season. Propelled by centuries from Phil Salt and Dane Vilas and seven wickets in the match from Matt Parkinson, Lancashire picked up a 10-wicket win away at Kent.

After starting the season with a hard-fought draw away at Northants, Gloucestershire fell to a narrow defeat against Yorkshire last weekend and will be looking to bounce back in style against Glen Chapple’s Lancashire side.

Despite the defeat, James Bracey with a career-best 177 and a debut century for Australian top-order batter Marcus Harris provided reason for optimism for the season ahead for Benkenstein’s Glos team. Ajeet Singh Dale, with an impressive six wickets in the match, was another stand-out performer for The Shire who finished the match disappointed to not have taken more than three points from the match.

For the trip to Lancashire, Gloucestershire are boosted by the return of experienced opening batter Chris Dent, who has now fully recovered from a period of illness caused by Covid.

Ben Charlesworth, however, has not travelled with the squad due to a foot injury he sustained during the match against Yorkshire. Glos will also once again be without bowler David Payne who is continuing to re-build his fitness following illness but could make a return to first-team action against Surrey on 28 April.

Naseem Shah has also been ruled out of the match against Lancashire due to a shoulder injury he sustained during the first match of the season against Northants.

Dale Benkenstein has named a 13-man squad for the trip to Lancashire: 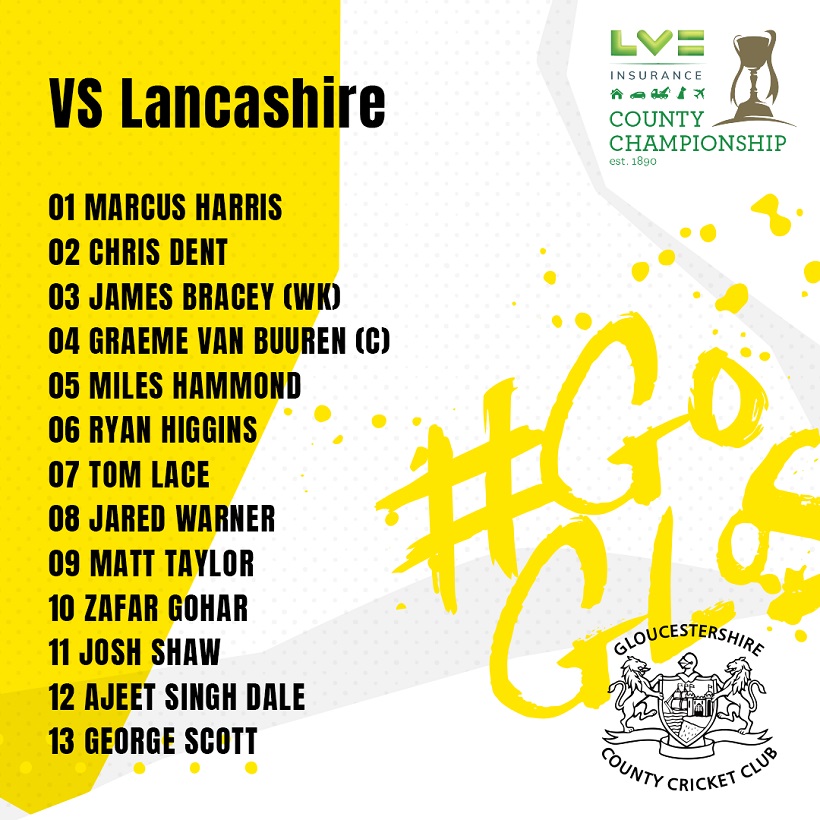 Glen Chapple’s Lancashire team are boosted for the visit of Gloucestershire by the availability of England international bowlers James Anderson and Saqib Mahmood, who were given clearance to play in the fixture by the ECB earlier this week.

The duo will add to a Lancashire bowling attack that already includes a wealth of experience in Hassan Ali, who is set to make his home debut, and last weekend’s star performer, Matt Parkinson.

Batters Steven Croft (155), Dane Vilas (124), Phil Salt (97), will be looking to build on their impressive start to the season when they come up against Gloucestershire’s bowlers.