Gloucestershire will have another chance to earn their first victory of the Bob Willis Trophy at home as Warwickshire visit Bristol this Saturday.

The two counties will be looking to be on the right side of the result on this occasion to still be in with a shout of progressing in the shortened format.

Gloucestershire’s captain Chris Dent picked up right where he left off last week, posting an impressive 92 in the first innings against Worcestershire and following that up with 67 runs in the second. If there was any rustiness from the shortened off-season, it wasn’t noticeable.

Graeme van Buuren added a free scoring 60 in the first innings and George Hankins did his best to stifle the Worcestershire bowling attack with a near five-hour 69 in the second innings; but Gloucestershire will need more contributions if they are to challenge an established division one side.

They could be helped by the additions of George Scott and Ben Charlesworth to the matchday squad. Both are coming back from minor injuries that prevented them from featuring in last week’s game.

Matt Taylor can consider himself unlucky not to have had more success against the Worcestershire batsman having looked dangerous whenever he had the ball in his hands. He will be hoping he can continue to find his sweet spots and reap the reward this weekend.

Josh Shaw started his first full season with Gloucestershire well picking up three wickets in the match and Tom Price, who took a wicket on his debut, will also be available.

Gloucestershire’s squad for the Warwickshire match: 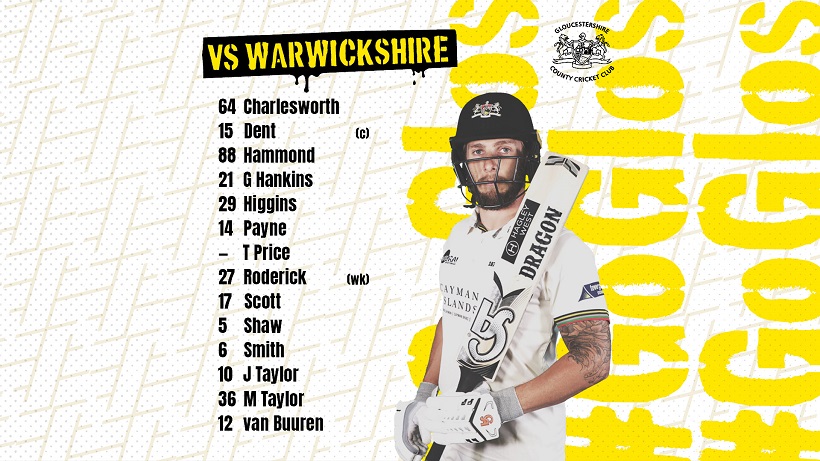 Warwickshire will be without seamer Olly Stone who sustained a low-grade left side strain that will see him out of action for up to four weeks. Stone was one of the standout performers in week one taking four wickets and adding 36 not out in the first innings against Northants.

Tim Bresnan is available and will be looking to add to a very impressive debut for his new county. He took four wickets at a 57.0 strike rate and made 105 with the bat.

Gloucestershire must also be wary of 20-year-old opener Rob Yates who started his season with 88 and was unmoved for over five hours. This knock was no anomaly for Yates who made 141 against Somerset at the end of last season in a similar fashion.

The match will be played behind closed doors with a limited number of working staff permitted to access the ground. Supporters of both teams will however be able to watch a live stream which will include every ball through the FREE Glos Cricket match centre here.

The improved streaming service will include instant replays, a range of different camera angles and ball by ball reaction from the Glos Cricket commentary team of Ian Randall and Ed Seabourne.