Two sides who fared better in white-ball cricket in 2020, both Gloucestershire and Surrey will be hoping to return to recent red-ball success; the home side, promoted to Division One in 2019 but yet to have their day in the sun; the visitors, winners of the 2018 County Championship but winners of just three first-class matches since.

Gloucestershire begin the season with a new, yet familiar face at the helm in Club legend Ian Harvey. Richard Dawson’s right-hand man for the past six seasons, Harvey’s transition to Interim Head Coach will be aided by his knowledge of the current squad and the addition of former teammate, Mark Alleyne to his coaching staff.

Captain Chris Dent will be hoping to begin the season just as he did in 2020 when he made 92 in his first innings against Worcestershire and followed it up with another half-century in the second. Consistency personified; Dent has surpassed 1,000 first-class runs in four of the last seven full seasons, 2016 his best year with 1243 runs at 47.81.

Alongside him at the top of the order will not be Ben Charlesworth who suffered a dislocated shoulder in preseason. Gloucestershire supporters will also have to wait a little longer to see overseas batsman Kraigg Brathwaite in a Glos shirt – he is currently quarantining having arrived in Bristol at the end of last week.

This leaves the door open for someone else to open the batting. Two men who have had this responsibility in the past, Miles Hammond and George Hankins, are in the squad for tomorrow as is James Bracey who was only available for one red-ball match last season due to England commitments.

The Club’s top two wicket-takers in recent seasons, David Payne and Ryan Higgins, are both available. Harvey also has the seam bowling options of Matt Taylor, Josh Shaw and George Scott. Jared Warner is being rested having suffered a side-strain last month and Dan Worrall will not be available for the Surrey match as he is due to arrive in the UK in mid-April.

Ian Harvey has named a 13-man squad for tomorrow’s match: 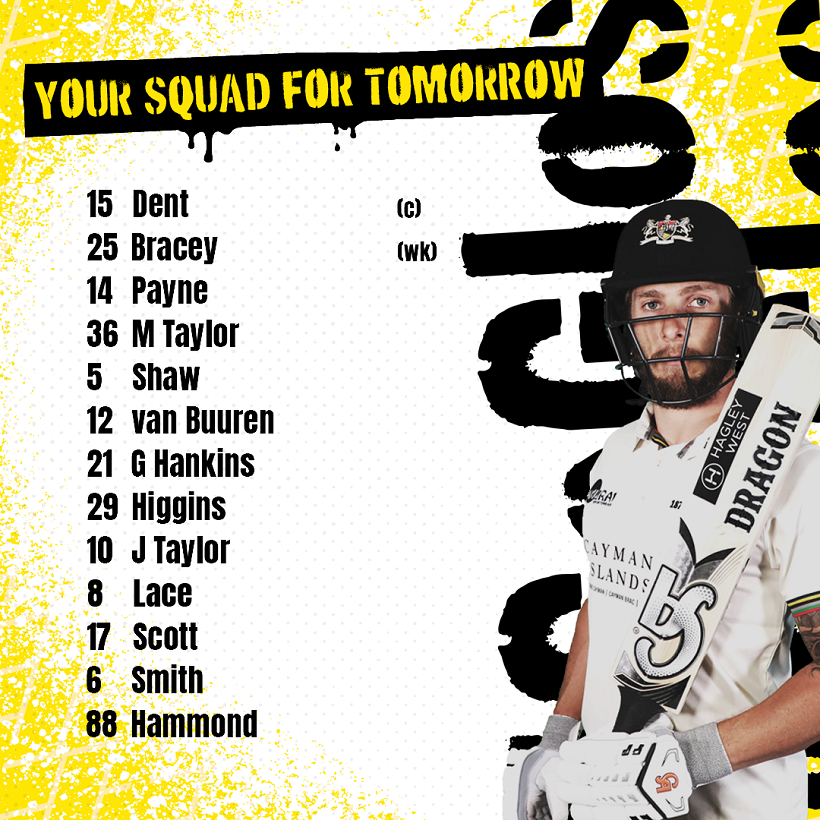 Surrey have named a 14-man squad for their trip to Bristol. Club captain Rory Burns, batsman Ollie Pope, wicket-keeper Ben Foakes and off spinner Amar Virdi are all available, having travelled with England to India over the winter and there is also a spot for seamer Reece Topley, who recently returned from international duty with the white ball.

They will be without overseas signing Kemar Roach for the opening game who, like Brathwaite, will need to quarantine and test negative for Covid before being allowed to play. They will however have the experience of former South African international, Hashim Amla at their disposal.

A team that has suffered more than most in recent years due to injuries and international call-ups, Vikram Solanki’s side will be hoping to take advantage of a healthy squad to begin the season. The addition of Jamie Overton at the end of last season seems to be an astute piece of business and he will likely lead the team’s seam attack.

The spin bowling partnership of Amar Virdi and Dan Moriarty was deadly in 2020 but Gloucestershire batsmen may be happy to see them this early in the year.

Rikki Clarke, having been unable to train last Thursday, was deemed not match ready for the game.