Gloucestershire will be hoping for a return to Finals Day this year as their 2021 Vitality Blast campaign gets underway on Thursday at Sophia Gardens.

Glamorgan, who Gloucestershire have not beaten in the competition since 2018, welcome The Shire to Cardiff for both Club's T20 curtain raisers.

The Welsh side were the only team to beat Gloucestershire in the group stages last season, winning home and away. T20 captain Jack Taylor is hoping that tomorrow’s match will have a different outcome.

“Glamorgan have been a bit of a bogey team for us in the last couple of years,”  he said. “We’re targeting this week’s match to hopefully start the season with a win. If we can see some success in the first three games, that will set us up nicely for the rest of the group stage.”

The familiar North and South groups return in this year’s competition after a COVID-affected season that saw the 18 counties split into three regional groups to limit travel. Glamorgan are one of two sides in the South Group that Gloucestershire will have faced last year, the other being Somerset.

Taylor will be confident that his side can replicate the success they saw in 2020 given that all players who featured on their journey to Finals Day will be available once again this season. James Bracey is the only player who will miss on tomorrow’s match as he is unavailable for the first three matches due to England commitments.

However, New Zealand international Glenn Phillips will be in the squad for tomorrow’s match. He has kept wicket for the Second XI in T20 matches this week and has also bowled spin in the LV= Insurance County Championship recently against Leicestershire.

Taylor shared his excitement with what Phillips can add to the team:

“Glenn has been with us for a couple of weeks now and has fit in like a glove. He’s very enthusiastic and can play as wicketkeeper, batter and also bowls spin so he’s perfect for what we were after.

“He will slide in towards the top of the order and hopefully do well for us there. Glenn’s had a good couple of years and played internationally for New Zealand so he’s going to add something different to the dressing room which will be great.”

Gloucestershire’s other overseas player Dan Worrall is being rested for tomorrow’s match having played six red-ball matches for the Club straight from Australia where the The Marsh Cup and Sheffield Shield had just ended.

Ian Harvey has named a 14-man squad for the trip to Cardiff: 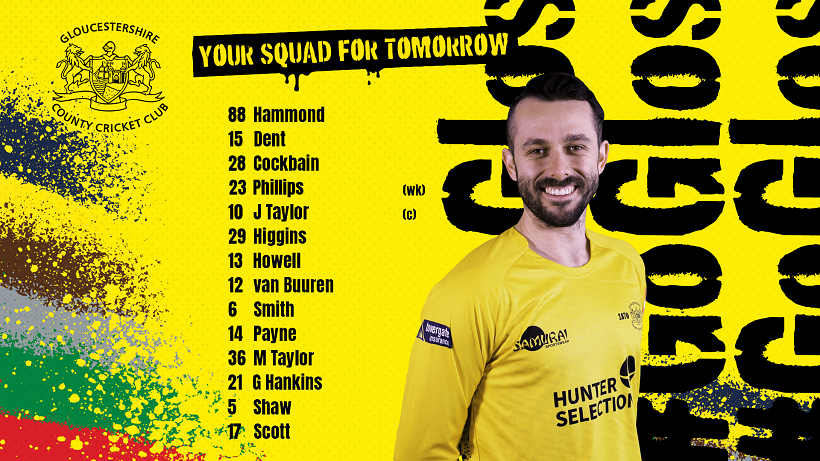 Glamorgan will be without their top run-scorer from 2020, Andrew Balbirnie, but they will see the return of fan favourite and record T20 scorer Colin Ingram. The South African has scored 2,031 runs at an average of 38.32 in his time at Cardiff.

While not necessarily a T20 specialist, Head Coach Matthew Maynard will have the option of using batter Marnus Labuschagne.

Timm van der Gugten will be one to watch out for having taken the most wickets for the Welsh side in the last two Blast campaigns. He is also coming into the T20 in good form after a man-of-the-match performance against Ireland for The Netherlands in an ODI last week.

Please note, there are no on-the-door ticket sales for this away fixture as Glamorgan have reached capacity.