Gloucestershire Cricket is delighted to announce the signing of Australian opening batter Marcus Harris on a two-year deal.

The 29-year-old, who has represented Australia in Test cricket on 10 occasions, will be available to play in all formats for Gloucestershire in 2022 and 2023.

“I’m delighted to sign for Gloucestershire for the next two years at what is a really exciting time for the Club. I’ve heard nothing but great things about the Club and I’m really looking forward to the opportunity.

“The other aspect that attracted me to Bristol is the opportunity to play in the T20 Blast for the very first time. I’d also like to thank Leicestershire for giving me my first opportunity to play county cricket. I thoroughly enjoyed my time there and I wish them all the very best for next season.”

Harris made his Test debut at the end of 2018 when he was called up for a four-match series against India. He scored 256 runs in the series, including two half-centuries, at an average of 36.57.

The left-hander’s first-class record is something to be admired. Since making his debut for Western Australia in 2011, Harris has scored 7,567 runs for his home state, Victoria and Leicestershire at an average of 39.82 and a strike rate of 54.67. He’s made 18 first-class centuries and 31 half-centuries with a high score of 250* off 403 balls for Victoria against New South Wales in 2018.

“Marcus is a tremendous player who has shown an ability to score a lot of runs in both red-ball and limited overs cricket. He has opened the batting for Australia at Test level and has come in at three in county cricket so we know wherever he slots in, he will make big scores.

“He is a leader and a consummate professional which is everything you want in an overseas player and having received a glowing endorsement from Club legend Michael Klinger, we have no doubt he will add huge value to the squad.” 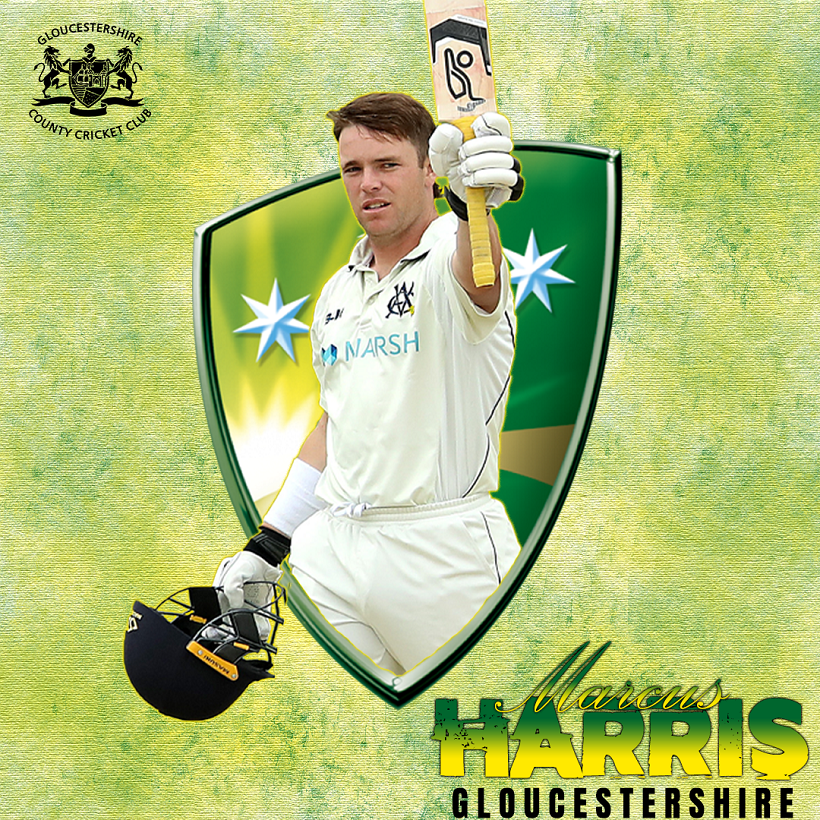 Harris experienced domestic cricket in England for the first time in 2021, representing Leicestershire in the LV= Insurance County Championship and Royal London Cup.

Appearing in eight first-class matches, Harris made 655 runs at an average of 54.58; the sixth best average amongst players who played at least half of the tournament. Harris’ maiden county cricket century came in just his third match against Surrey, the first of three consecutive matches in which he made triple-figure scores at Leicester.

His high score of the season was 185 from 311 balls in a victory over Middlesex before Gloucestershire experienced his talent first-hand as he racked up 148 off 236 to lead his team to victory in early June.

“The signing of Marcus Harris is a big statement of intent from the Club. We are heading into next year off the back of a season in which we won more County Championship matches than any other county and the most in our history since 1998, but we want to be fighting for trophies.

“Marcus is an ambitious player with a huge amount of talent and we are delighted that he has seen the vision of the Club and wants to be a part of that over the next two years.”

In the 2021 Royal London Cup, Harris once again topped the averages for Leicestershire with 232 runs at 58.00 in his four appearances. That included a brilliant 127 against Yorkshire which followed a 75-run showing against Derbyshire.

Harris has scored 1,488 List A runs in his career at an average of 31.00 with that century against Yorkshire in late July being his career best.

The Aussie opener has not played in T20 cricket in over a year-and-a-half but has shown he is capable of performing in the shortest format. Harris was the top scorer for Melbourne Renegades in the 2017/2018 Big Bash League with 324 runs at 29.45.

Harris will join up with the Gloucestershire team at the conclusion of the Australian domestic season in March 2022.