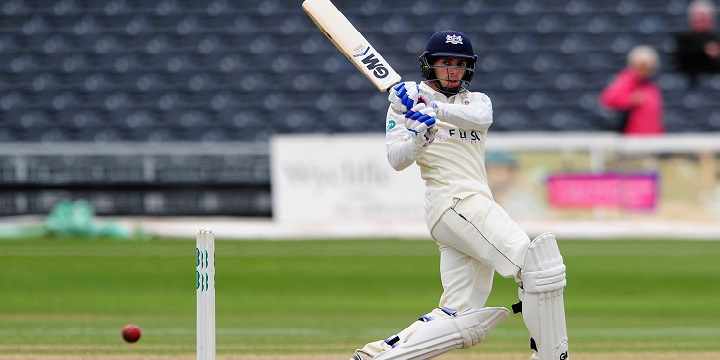 After losing a day and a half to the weather, the likelihood of a positive result was further diminished by a delay to the start of the day's action. The outfield at the FCG, after being ravaged by rain for the best part of two days, was still sodden despite the best efforts of the County ground staff.

Play did eventually get underway at 1.10pm - the players having taken an early lunch - with Gloucestershire resuming their first innings on 69-0 in reply to Leicestershire's 334 all out. Chris Dent and Graeme van Buuren went on to record centuries as Gloucestershire scored 403-2 declared.

Both sides went in search for bonus points that could be of pivotal importance come late-September with openers Gareth Roderick (23*) and Dent (34*) looking to kick on while the Foxes were hoping to chip away at the away side's batting line-up.

Skipper Roderick began positively, flicking Neil Dexter away through mid-wicket for four from the first ball of the day, before surviving a lbw appeal from the next delivery.

Dent, meanwhile, would take advantage of a loose ball from Clint McKay in the following over to guide one away to the fine-leg boundary and score his first runs of the day.

Runs were beginning to flow more freely than they were for the pair on the truncated second day, Roderick driving McKay through extra cover, and Dent doing likewise through mid-on to move to 50. The gritty knock came from 101 balls, including eight fours.

Gloucestershire passed 100 in the 34th over with Roderick taking a single of the newly-introduced Charlie Shreck. Dent would continue his good start, playing attractively to reach the ropes on a regular basis, and the left-hander was playing with fluidity to march towards his century.

County skipper Mark Cosgrove looked to halt Dent and Roderick's progress by introducing Richard Jones into the attack. The on-loan seamer produced a spell of quick and accurate bowling to pick up his first wicket since the Foxes acquired his services from neighbours Warwickshire, Roderick (46) edging a full delivery to Angus Robson at first slip.

It left Gloucestershire at 138-1 as the brakes were applied for a period, Jones' five-over spell finishing shortly afterwards, yielding just 11 runs.

Gloucestershire, though, would pass through the 150 barrier in the 48th over, and the imperious Dent would find his stride again to drive McKay through covers in the 49th over.

The opener moved to within three of his ton by guiding a Rob Taylor delivery down over the ropes at third man, and would bring up his third century of the season in splendid fashion.

From the 163rd ball of his innings, Dent drove McKay back down the ground to record the 16th four of an innings that also included a maximum.

Gloucestershire, with Dent's scoring salvo showing no sign of abating, passed 200 in the 56th over, the centurion hitting the off-spin of Aadil Ali straight down the ground for four, followed by the second six of his innings later in the over.

In tandem with Dent, van Buuren was steadily compiling runs of his own to move towards 50, breaching the boundary ropes frequently to find himself 41* from 61 at tea, with partner Dent 121*.

Gloucestershire left the field at 229-1 to leave them 171 runs shy of the 400 required with 39 overs remaining and nine wickets intact.

Dent and van Buuren would continue in the same vein on resumption, quickly bringing up  the 100 partnership and putting the 250 runs required for the second batting point on the board.

Van Buuren, who has made an impressive start to his Gloucestershire career, turned Dexter away to the leg-side for a well-constructed 50 (82b) in the 68th over before Dent pulled Jones away for four in the next over to edge nearer his 150.

To reach the milestone he would have to survive both a run-out attempt by substitute fielder Sam Evans and a stumping chance in the 71st over, but he would pass the landmark when he lifted a Cosgrove delivery over mid-on in the 72nd (213 balls, 23x4, 2x6).

Gloucestershire secured their third bonus point when Dent hoisted a Dexter delivery over mid-on to run two and he and van Buuren looked set to propel their team to the full quota of bonus points as they continued to spray shots to all corners of the ground.

Dent would, however, depart lbw on the pull to Dexter soon after, his excellent 165 coming from 229 balls to leave Gloucestershire at 315-2 from 76.3 overs following an impressive 177-run partnership with van Buuren.

The number three batsman went on to take a single from Shreck in the 82nd over to record a sublime quick-fire century from 123 balls, featuring 13 fours and two sixes. He was joined at the crease by the big-hitting Australian Michael Klinger, who cleared the ropes with a huge shot over mid-wicket the ball after van Buuren reached three figures.

South African van Buuren (121*) and Klinger (45*) continued to push Gloucestershire towards 400, the latter blazing a Shreck delivery over mid-wicket and, in the 90th over, completed the task with the former flicking one away to the deep square leg boundary. It meant a continuation of fine form for the duo, who both average over 100 in the competition.

Gloucestershire's fifth batting point took them to a 12-point return from the match, compared to County's 8, to leave them sitting in third-place, one above Leicestershire who now have another important game in the competition at Worcestershire on Sunday.