Gloucestershire will be hoping to bounce back from an opening match defeat in the Royal London Cup with a win against Worcestershire in the second home fixture in three days.

It seems outlandish to think that the second match of an eight-game group stage is a must win but with trips to Durham and Sussex to follow, another home loss would leave Gloucestershire with a lot to do to finish in the top three.

While the loss to Lancashire was not the ideal start to the campaign, it came with its positives. Ben Wells made his professional debut for The Shire keeping wicket and batting at seven in the absence of James Bracey, Josh Shaw took career best figures of 4/36 in just his second List A match and Matt Taylor score a maiden List A half-century with 51 not out off 64 balls.

Ian Harvey will be looking for more from his top-order batters although it was clear that batting was much more difficult to begin the game on Sunday.

Ben Charlesworth, who made 130 against Wiltshire last week, made just 12 runs opening the batting alongside George Hankins, who was lbw to Hurt without scoring. Tom Lace and Graeme van Buuren both looked like they had steadied the ship but a mixture of the conditions and the relentless Lancashire bowling attack meant they couldn’t stay in for long.

Chris Dent returns to the squad having recovered from a broken finger suffered while fielding in a T20 match against Hampshire. He will undergo a fitness test tomorrow morning to evaluate whether or not he is fit to play. 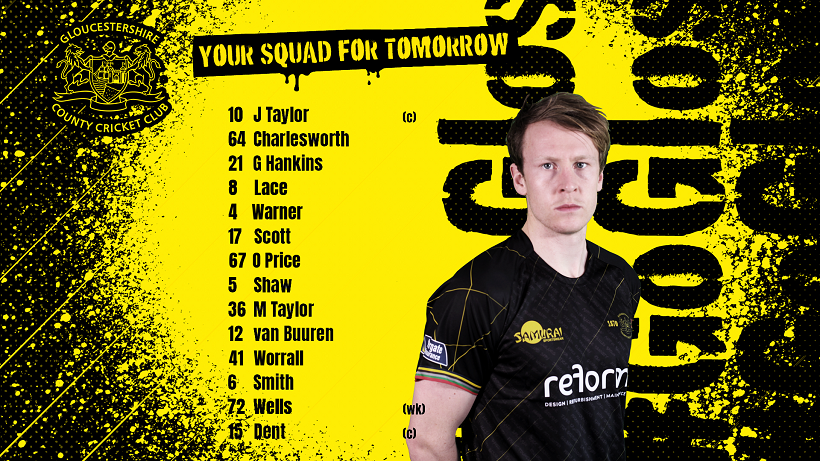 Worcestershire got their campaign off to a winning start with an unlikely 3-wicket win over Kent at New Road. Looking dead and buried on 184/6 chasing 322, captain Joe Leach and Ed Barnard added 134 runs for the seventh wicket partnership to pull them back to within touching distance of an opening game victory.

Opening batter Jack Haynes’ knock may have gone under the radar but the 20-year-old, who has played with Charlesworth at international level for the England Under 19s, looked in good nick with 77 made off 89 balls in just his second List A match.

Joe Leach went wicketless while Ed Barnard took more than any Worcester bowler with two, although he was the most expensive bowler of any player in the match.

Josh Baker and Jacques Banton both made their debuts against Kent while a familiar face in Gareth Roderick will be making his first return to the Bristol County Ground after leaving the Club at the end of the 2019 season.