After a heart-breaking defeat in the final group match of the County Championship, Gloucestershire must now pick themselves up for a T20 contest and the visit of Surrey to Cheltenham College.

With just one win needed from two games to qualify for the knockout stage of the Vitality Blast, Ian Harvey will be hoping his side can avoid going into the last match against rivals Somerset requiring two more points to finish in the top four.

For Surrey, Friday’s match is win or go home as they currently sit fifth in the South Group, one point behind both Gloucestershire and Somerset.

Following back-to-back defeats to Somerset and Hampshire, Gloucestershire picked up a much-needed win in the first T20 match at Cheltenham last Friday against Middlesex. That win propelled them back into the top four and back in control of their own destiny.

Ryan Higgins led the way with the bat finishing with 43 off 25, the first time he had been dismissed in this year’s competition. He then closed out the game only allowing six runs off the final over after a typically miserly Benny Howell took 3/23 to dash any hopes Middlesex had of winning.

Gloucestershire’s top run-scorer in thi year's Vitality Blast will be hoping to add to his 423 runs and finish the Cheltenham Festival on a high note.

Chris Dent remains out with a finger injury which may result in Benny Howell opening the batting for Gloucestershire once again. He failed to score in last week’s match against Middlesex but has made two half-centuries this season and scored the second most runs for The Shire.

David Payne will make his return to the side having missed last week’s T20 game due to an unexpected call-up to the England ODI squad. 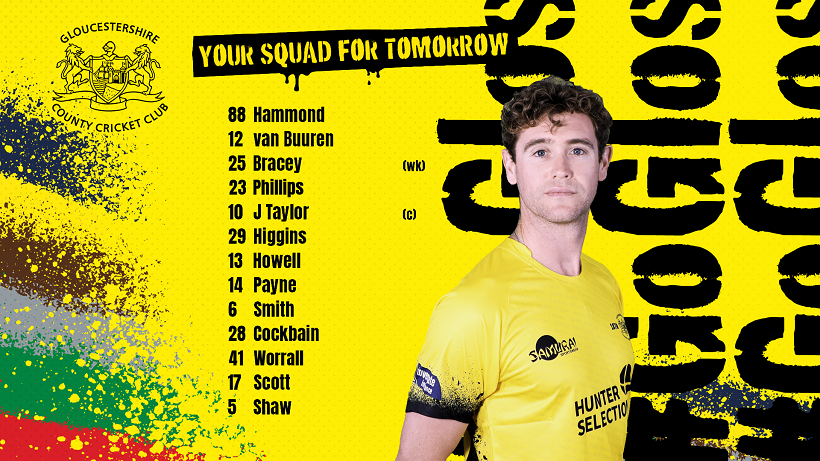 43-year-old Gareth Batty will lead his side again in a rematch of last year’s Vitality Blast semi-final in which the London side came out on top. For the visitors, only a win will suffice for Surrey in their final group game, and that may not be enough for qualification to the next round.

Back-to-back losses to rivals Somerset leave the Londoners on the outside looking in but they will be boosted by the return of Will Jacks who was also with the refreshed England ODI squad. Reece Topley could also make his first appearance in this season’s Blast having recovered from a side strain.

Tom Curran, Jason Roy and Sam Curran are all unavailable for Surrey as is Jamie Overton who suffered a calf-injury in this week’s County Championship match against Somerset.