Two years on from the heartbreak of missing out on the knockout stage of the competition by run rate, Gloucestershire now look to compete without some of their star players – lost to The Hundred.

However, supporters of The Shire will be pleased to see Ben Charlesworth back in the line-up after suffering a dislocated shoulder in a preseason T20 friendly. He made 130 off 146 balls in this week’s meeting against Wiltshire at Bristol County Ground.

Another player who has been unlucky no to feature more this season, Graeme van Buuren, has been in scintillating form. After making 61 runs and 5/36 against Wiltshire, he scored 105 runs against Glamorgan Second XI on Thursday.

Without the big-hitting of Dent, Hammond, Cockbain or Phillips, Gloucestershire will need van Buuren as well as Tom Lace to carry the scoring load if they are to be successful.

Ollie Price is included in the matchday squad as is Jared Warner providing youth and variation to the bowling attack. Warner could make his first competitive appearance for Gloucestershire against Lancashire tomorrow

New signing Ben Wells will also be hoping to make his debut for the Club after impressing with the Second XI and in the match against Wiltshire.

Tickets are still available to purchase for this match, please see ticket details below: 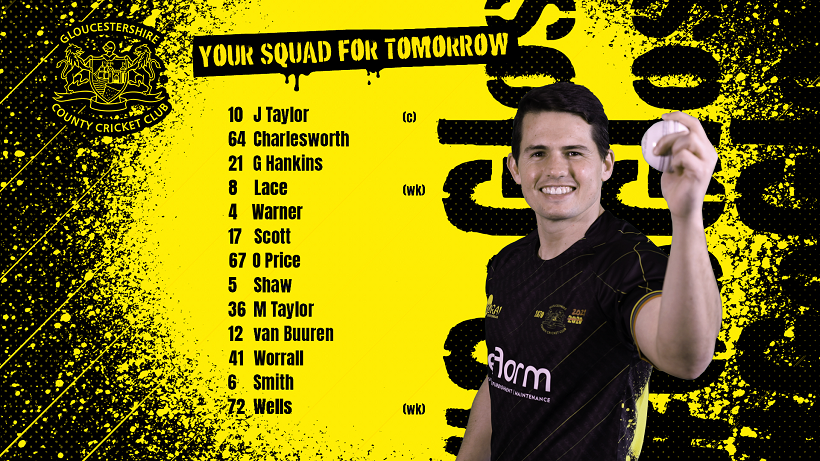 Lancashire will be without eight players for the duration of the competition due to The Hundred: Jos Buttler, Alex Davies, Richard Gleeson, Tom Hartley, Liam Livingstone, Saqib Mahmood, Matthew Parkinson and Luke Wood.

Lancashire’s overseas signing for the competition, the India batsman Shreyas Iyer, has been ruled out through injury. However, the Red Rose County will be confident of challenging for the top three places with their depth of talent available.

Lancashire reached the semi-final of the competition in 2019 before being beaten by Hampshire in Southampton.

They started the current campaign with a two wicket win against Sussex at home.

Lancashire’s squad for tomorrow’s match is yet to be announced.