High-flying Kent Spitfires make the trip to Bristol having won five of their opening six matches that sees them top of the Vitality Blast South Group.

While Kent have returned to winning ways in their last two outings following their only loss of the campaign so far against Somerset, Gloucestershire have had to try and keep dry with two matches abandoned without a ball being bowled due to rain.

Of Gloucestershire’s opening six matches, two have been wins, two have been losses and two have been lost to rain. The last time Ian Harvey’s side were on the field, Ian Cockbain top edged for six on the last ball of the 18th over at Radlett giving The Shire a two-run win by DLS against Middlesex.

Jack Taylor will be hoping he can lead his team to a first win in front of the Bristol crowd on Tuesday while reducing the gap between the county and the top three sides in the group.

He will have the option of bringing James Bracey back behind the stumps and handing him the gloves that Glenn Phillips has kept warm up to now. Should Bracey resume his role as Gloucestershire’s first choice wicketkeeper, Phillips could bowl right-arm off spin.

Ian Harvey will be absent from tomorrow’s game as a Covid precaution. Mark Thorburn will lead the coaching team in Ian’s absence. 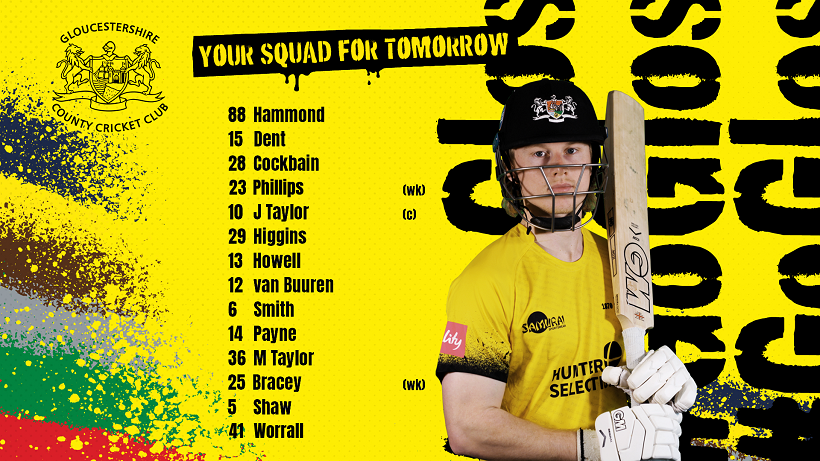 Kent’s opening partnership of Daniel Bell-Drummond and Zak Crawley put on a stand of 145 runs that lasted until the 12th over against Essex Eagles on Sunday. As a team, they ran up a score of 236 for the loss of just three wickets, a club record T20 total.

Bell-Drummond’s 88 was his second 50-plus score of the season, the other coming against Gloucestershire. Crawley has averaged 44 in his three appearances so far this season.

Jack Leaning, who made an unbeaten 81 in the reverse fixture, has been in fine form with the bat scoring 213 runs at 53.25. His contributions so far this year saw him move ahead of Alex Blake in the batting order in their last outing. He made 42 not out and also took a T20 career best 3/15 from two overs in Kent’s win over Essex.

The Spitfires are the only county to have more than one player with double digit wickets in this year’s Vitality Blast with Matt Milnes and Fred Klaassen both on 10. The right-arm, left-arm seam bowling duo have taken wickets at an average of 17.10 and 17.30.

Be the scorer - Click here for our online scorecard.