Gloucestershire will be hoping to continue their winning ways as Glamorgan make the trip across the Severn Bridge for a Thursday night clash under the lights.

Following a thumping of South Group leaders Kent Spitfires at Bristol County Ground, Gloucestershire could take a big step towards a top-four finish with a win over the Welsh side who have been a tough nut to crack for The Shire in recent years.

After seven matches, Ian Harvey’ side sit in fourth place, two points behind leaders Kent and two points ahead of tomorrow’s visitors. A win could see Gloucestershire move four points clear of the chasing pack with just five matches left to play.

Ian Cockbain will not line up for the home side after an accidental collision with Kent spinner Qais Ahmad forced him to retire hurt on 30. He will have a scan in the next 48 hours where the extent of the injury will be determined. Any updates will be posted on www.gloscricket.co.uk.

The unfortunate injury means George Scott will be added to the matchday squad. James Bracey could make his first T20 appearance of the season if Jack Taylor chooses to replace one top order batter for another.

All four of The Shire’s top order made up of Miles Hammond, Chris Dent, Ian Cockbain and Glenn Phillips all made good starts against the Spitfires making at least 30 runs at high strike rates but Jack Taylor will hoping at least one can turn a start into a half-century against Glamorgan. 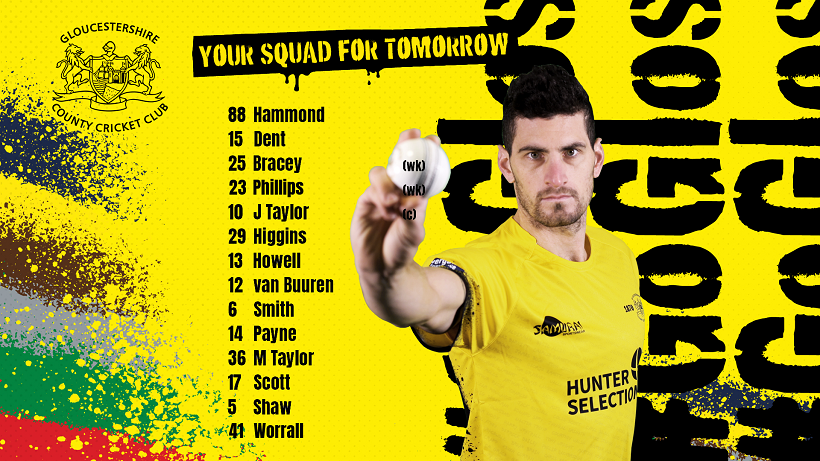 Glamorgan will be in a similar position to where Gloucestershire were on Tuesday, coming into the game after successive washouts against Somerset at Taunton and the Sussex Sharks at Hove.

The Welsh side are sitting in the middle of the Vitality Blast South Group with seven points and home wins over Essex Eagles and Middlesex.

Marnus Labushagne, who came into the season without a great deal of T20 experience, has been without question the highlight of Glamorgan’s campaign so far. The Australian has made 261 runs at an average of 65.25, the fifth most in the 2021 Blast. Against Gloucestershire at Cardiff, Labushagne made 93 not out, a career best and maiden 50-plus score.

All-rounder Dan Douthwaite hasn’t had much joy with the bat so far but he has been the most productive bowler for Glamorgan, taking 8 wickets at a strike rate of 11.2. Labushagne has also been an effective bowler with his spin accounting for 6 of the visitors’ wickets.

Bristol has been a happy hunting ground for Glamorgan in T20 cricket as they have won the last five matches between the two teams at the Bristol County Ground. Chris Dent is the only player who was in the team the last time Gloucestershire won in 2010.