The Athletic News of Monday 25 October 1915 reported that, on the previous Saturday, Bristol Rovers had recovered from a two goal deficit to beat Southampton by four goals to two, whilst at Newport, Bristol City, with “not a weak spot in their team” had defeated Newport County by three goals to one.  At a national level, the page 3 headline advised that “Chelsea Capitulate” as they lost by the only goal of the match at Queens Park Rangers.

There had been an extensive programme of football for the paper to report, but the main headlines concerned the death on that same day of the man whose presence had dominated the world of sport in general and cricket in particular for over fifty years.

“The King of Cricket, William Gilbert Grace has passed to the Great Beyond” ran the leading article “He has left no successor to that title. Men of his pre-eminence in any walk of life are rare.”

He had suffered a relatively mild stroke some two weeks previously whilst working in his garden.  It had slightly affected his speech and he had been put to bed to rest.  The following week, the Germans had launched their great Zeppelin raids, one of their targets being the Woolwich Arsenal, just a few miles away from Grace’s home in Mottingham.  The sounds of the explosions were heard all over London.  Simon Rae in his book W.G. Grace – A Life recounts the story of how Grace’s old cricketing friend H.D. “Shrimp” Leveson-Gower, “trying to josh him out of his depression,” asked him how he could be bothered by Zeppelins, having seen off generations of fast bowlers.  Grace’s now famous reply was that he “could see those beggars, I can’t see these.”  Ten days later, he suffered a heart attack and passed away.  It seems clear that the raids had been a worry to the great man and were probably a contributory cause to the fatal attack and the Great War had, although indirectly claimed possibly its most famous victim.

At the time of his death, eight cricketers who had played for Gloucestershire and had taken part in the conflict had already lost their lives; a further ten were to suffer the same fate before the war was over.

Of the eighteen, Oswald Wreford-Brown, a captain in the Northumberland Fusiliers and a fortnight short of his fortieth birthday was the oldest, Claude Mackay, a Second Lieutenant in the Worcestershire Regiment aged twenty, was the youngest.  Four of them, including Mackay had made their debuts in 1914.

Mackay played just one game, in July 1914 at Maidstone, against a Kent attack that included Colin Blythe, later also to be killed in action.  Claude’s contribution; scores of 13 and 15, bowling figures of 5-0-24-0 and one catch.

Born in India in 1894, he was the son of an Officer in the Indian Police Service who had been serving there during former Gloucestershire captain Walter Troupe’s time in the same force.  On his father’s retirement from the service they had moved to Clifton.  Claude had attended the College where he had been a Lance-Corporal in the College OTC.  In 1912 and 1913 he was in the College Cricket XI, the second year finishing second in batting and first in bowling.  In 1914 he had just completed his first year at Corpus Christi College Cambridge where he had taken part in the Freshmen’s Trial Match without any particular success although, after his death, Wisden, in his obituary notice reckoned that he “would undoubtedly have made a name for himself had he been able to devote himself to first-class cricket.”  He was clearly an all-round sportsman having also won the Challenge Cup in the Athletic Sports at Clifton and the Public Schools heavyweight boxing competition at Aldershot in 1913.

One month after playing at Maidstone he applied for a commission with “the 3rd Gloucesters or any other Regiment in which a vacancy may occur” and was commissioned as a Second Lieutenant into the Regiment but by the time that he was posted to France in November 1914 he had been transferred to the Worcestershire regiment.  Following a bout of influenza he returned to active service, was wounded in action south of Ypres and died in the military hospital in Boulogne on 7 June 1915. 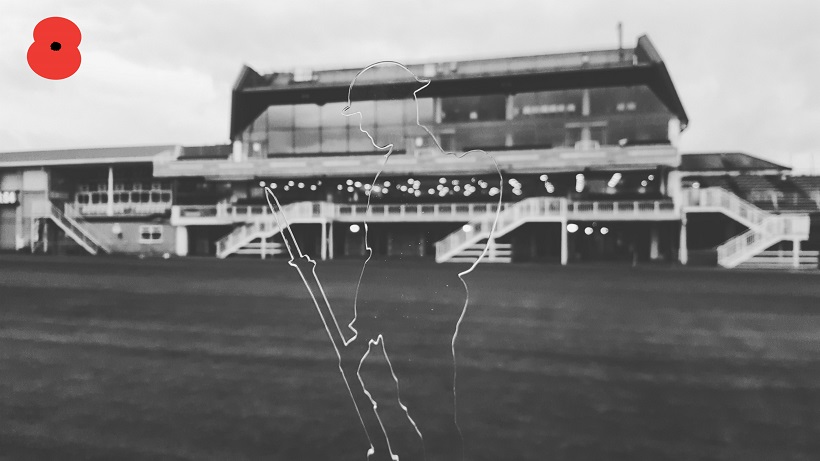 The other three debutants in that season were Burnet James, William Grant and Hugh Jones.

Burnet James was born in Bristol in 1886.  His father was Sir Edward James, a tobacco manufacturer in the Bristol firm of Edwards Ringer and Bigg and one of the original directors of the Imperial Tobacco Company.  He was also twice Lord Mayor of Bristol.  Educated at Charterhouse, where there is a photograph of him in the Cricket XI of 1906 and also a member of Clifton Rugby Football Club, James was a batsman, captain of Imperial CC where in the 1914 season he had averaged over 100.  He made his Gloucestershire debut on 21 May at Bristol against a Warwickshire team including Percy Jeeves, also to be killed during the war.  Scores of six and 10 were possibly indicative of his ability at this higher level and in two further games against Northants at Bristol and the return fixture against Warwickshire at the Bulls Head Ground in Coventry, in four innings he managed only a further eleven runs.

He had been a member of the Gloucestershire Royal Garrison Artillery Volunteers in 1907, serving with them for five years.  On the outbreak of war, he re-joined the unit before transferring to the Royal Flying Corps in July 1915 where he became an observer.  On 26 October, together with the pilot, their two seater bi-plane was shot down whilst on a reconnaissance mission and they were both killed.

William St Clair Grant, born in India to a serving army officer in 1894, was a schoolboy contemporary at Clifton of Claude Mackay where they played in the same College Cricket XI and where he had also been a member of the College OTC.  He had obtained a place at Pembroke College, Cambridge.  His debut for the County was at Hastings against Sussex on 13 July and he played without any particular distinction in three other matches against Kent at Maidstone, where he made his highest score of 16 and the game where Mackay made his debut and then at Trent Bridge against Notts and finally against Yorkshire at Harrogate.  In a total of seven innings he made 55 runs.

His last game ended on 31 July 1914 and on 6 August he applied for a commission with the Leicestershire Regiment and on 11 August he also applied to the Gloucestershire Regiment, quite possibly in the knowledge that his friend Mackay had also applied to “The Glosters” on the same day.  He was accepted by both Regiments and along with Mackay opted for the Glosters.  They were both, however transferred to the Worcestershire Regiment before leaving for the front.  In January 1916 he was wounded in the left knee and also contracted scarlet fever which saw him removed from active service until May of that same year.  When fit again, he joined the Cameron Highlanders.  Awarded the Military Cross early in September 1918 having twice “made a reconnaissance under heavy artillery fire, bringing back a full account of the situation, he went round the line while fighting was in progress encouraging his men” he was killed in action on 26 September 1918 at Passchendaele.

His obituary in Wisden notes that he had played for the Gloucester City XI and might have been on his way from or back to Clifton where he lived with his widowed mother when, on May 4, 1914 he was charged at Gloucester City Petty Sessions with driving a motor-car at a speed dangerous to the public on April 15?  P.C. Keely and P.C. Eames both stated that they had never seen a car going faster in Gloucester.  Their evidence was corroborated by William Brooking, a plumber of Westgate Street in Gloucester and Warrant Officer Greensley of the Bristol Police Force said that the defendant had admitted to him that he was driving the car and that he was travelling at between 25 and 30 miles per hour.  In his absence he was fined £3 3s 0d with £1 3s 2d costs.

Lydney born Hugh Jones had known cricket all of his life.  Born in 1888, his father William, the owner and proprietor of a shipping business, had first played for the Lydney club as a fifteen year old in 1869 along with his father and two uncles.  William became captain of the side in 1896 and retained that position until the outbreak of war.  His ambition for the club had always been “to send a player or two from the Forest” to play for the County Club and his ambition was fulfilled when his son, Hugh, made his debut against Worcestershire on 6 July 1914 at New Road Worcester where he scored 11 and 0.  At the time of his selection for the game, the Western Daily Press described him as “a Lydney amateur, who has scored freely in Forest of Dean matches” but of his first innings their reporter stated that “contrary to anticipations, Jones showed himself a defensive batsman” and that “there was not much chance of judging his scoring abilities, but he certainly plays with a straight bat and has a good idea of back-play.”

He was not selected again and having enlisted as a private in the Gloucestershire Regiment gained a commission with them in February 1915.  Wounded in action on three occasions between June 1917 and April 1918, he had by then been awarded the Military Cross in October 1916 for “Conspicuous gallantry during operations. While clearing trenches with his company after an attack, the enemy opened a heavy bombardment.  He displayed the greatest courage while standing in the open under shell fire for two hours assisting his men to get into safety.  Later he went back by himself, under heavy shell fire, and fetched two stretchers for his wounded.”  Following the incident in April 1918, when he was wounded in both legs, he was transferred back to Britain to the Military Hospital in Chatham.  He was said to have been making a good recovery from the shooting but sadly, contracted pneumonia the day before the Armistice was signed.

A former pupil of Wycliffe College, an obituary written in 1923 for a school publication Wycliffe and the War, a School Record, recorded that he was a modest man who, when recommended for the Military Cross, protested to his Colonel who politely told him to mind his own business.  He subsequently told his parents “please don’t shout about it.”

These were four of the eighteen first-class cricketers who lost their lives in the Great War. All eighteen are commemorated on a memorial tablet, commissioned by GCCC Heritage Trust, which is situated within the Museum and Learning Centre at the Bristol County Ground, Bristol. 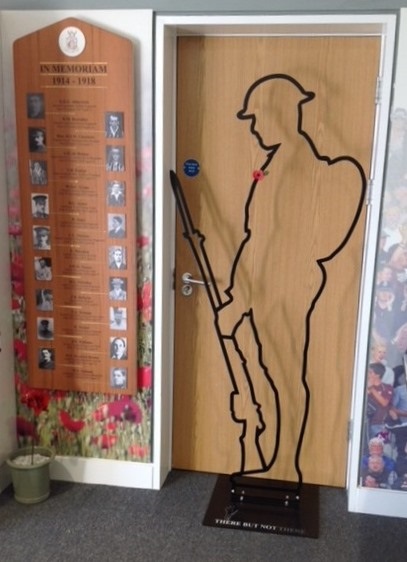