Gloucestershire Cricket will be at home for the first match of the 2020 domestic season, following the release of the official fixture list for The Bob Willis Trophy (BWT), a one-off tournament created by the England & Wales Cricket Board in response to the Covid-19 crisis which has severely disrupted the cricket season.

The first day of August will see all 18 first-class counties in action in the BWT with Worcestershire making the trip to the Bristol County Ground for the opening fixture of the season.

The BWT is a separate competition to the County Championship, for this year only, and will be regionalised into three groups of six counties, with five group-stage matches for each county. A five-day final will be played to decide the champion.

Gloucestershire’s opponents in the central group will be Worcestershire, Warwickshire, Glamorgan, Somerset and Northamptonshire.

The Bristol County Ground will be the host venue for three of Gloucestershire’s five group matches with the team travelling to play away at Glamorgan and Somerset.

The two counties with the highest points total across all three groups will face off in a five-day final at the end of September.

“It is amazing to think we are now a week away from the start of the 2020 season, the 150th in our Club’s history and to have our red ball schedule confirmed is very exciting.

"The regional nature of the fixtures and the schedule of home and away matches that Gloucestershire has been given is fantastic. To have three exciting home matches and the two away ones in commutable distance of the Bristol County Ground is brilliant. They enable us to reduce travel time and also remove the need for any overnight accommodation which had been a point of concern for the Club.

"We’d once again like to thank all at the ECB and our partner counties for all of their efforts in getting the season away in the most safe and secure way possible – we can’t wait to get started.”

Each of Gloucestershire’s home fixtures will be streamed on the Gloscricket Match Centre which can be accessed from the homepage of the Gloucestershire Cricket website here. A step-by-step guide on how to set up your account can be found here.

The enhanced streaming service will feature more coverage of the ground with instant replays, live scorecards and play-by-play reaction courtesy of the Glos Cricket commentary team.

Supporters of The Shire will be able to stream away matches from the corresponding county’s website and/or social media channels. 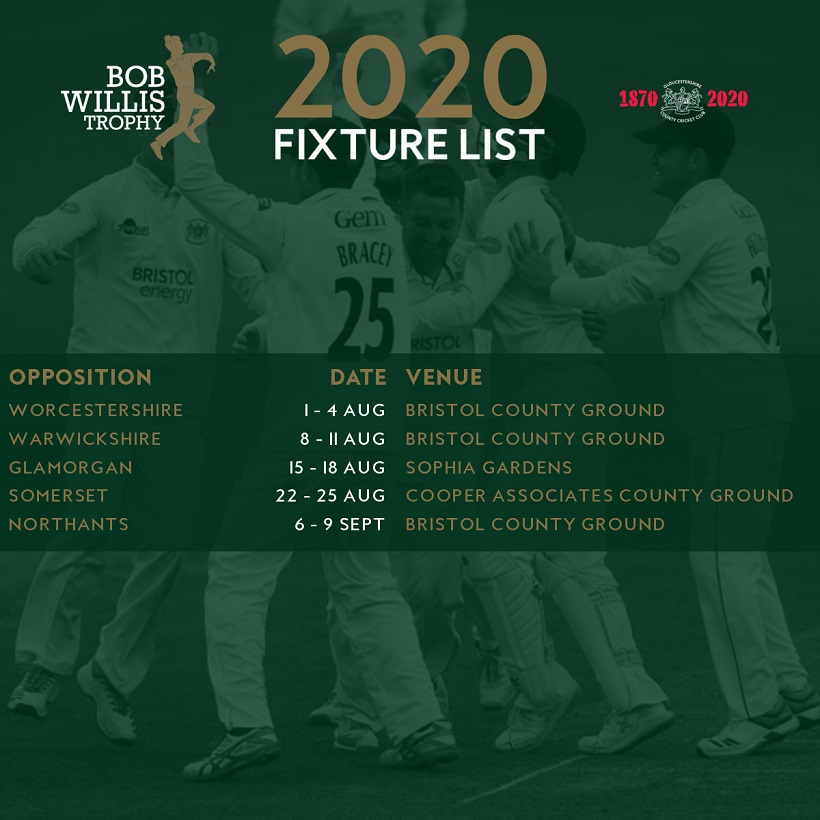 “There has been a strong determination across the game to play men’s and women’s domestic cricket his summer and the fact that we will owes to the significant work and collaboration across the county network.

“The efforts to deliver a new one-off men’s and women’s competition, in addition to a shortened Vitality Blast, to meet the unprecedented requirements of playing professional cricket during a pandemic have been remarkable.

“It will be a fitting reward for all that work, and for the patience of all county cricket fans, when the first ball is bowled in the Bob Willis Trophy next Saturday. To have this year’s first-class competition named in Bob’s honour is a perfect gesture to a great man who is sorely missed.

“I am pleased that we have been able to schedule women’s domestic cricket and ensure competitive cricket following last month’s confirmation of the first cohort of players on Regional Retainer contracts.

“We will need to remain agile to the challenges that will await us during the shortened domestic season with the health and wellbeing of our players, staff, officials and fans continuing to be our first priority.”

Below are some answers to questions you may have about the competition.

Will the Bob Willis Trophy have first-class status?

Yes, although there will be some changes from the County Championship after the ECB, First-Class Counties and Professional Cricketers’ Association have worked closely to build a set of guidelines to help mitigate against injury, especially to fast bowlers.

The loan system will also be altered for this season only to allow counties to loan a player from another county for a minimum of a week.

Why not just play a shortened County Championship?

On June 29 the First-Class Counties agreed to play red-ball and white-ball cricket in this shortened summer and, after the opening 10 rounds of the County Championship were lost due to the pandemic, a truncated red-ball competition was needed.

The 18 First-Class Counties worked closely with ECB to plan a tournament that could be staged within strict health and safety protocols and included minimising travel and need for overnight hotel stays while adhering to Government guidance.

That has resulted in a regionalised competition that will not only ensure age-old rivalries are played out each round but also that all 18 First-Class Counties have a chance to win the competition.

Will the point-scoring system be different from the County Championship?

Will the winning county be presented with the County Championship trophy or a new trophy?

A new trophy will be presented to the champions. The trophy is set to feature a cuboid design painted by Bob Willis’ wife Lauren, following his death last year, and which captures his iconic bowling action in full flow.