A look at the Vitality Blast South Group

As we gear up for our first match in the 2021 Vitality Blast on Thursday 10 June against neighbours Glamorgan, we take a look at our opposition in the Vitality Blast South Group.

Tickets are available and on sale for both Bristol & Cheltenham. Make sure you secure your spot by clicking on the link here.

Key man: Ryan ten Doeschate – Only six players have played more T20 games than the 369 appearances totted up by the Dutch international. His middle-order runs come quickly and often stealthily.

Flies under the radar: Paul Walter – ‘Tall Paul’ hits a big ball, he once his six sixes in an over in club cricket, and his lanky left-arm seam isn’t a bundle of laughs to face either.

Best Player Under 24: Jack Plom – The Basildon-born fast bowler was a rare positive in 2020 with seven wickets coming fairly cheaply. He has genuine pace and has been impressing during second XI warm-ups.

Blast expectations: Essex have rolled with the boom and bust of T20 cricket in the past two seasons. In 2019 they lifted the Blast trophy for the first time, but a year later the Eagles could only manage two wins to finish with the fourth-lowest points tally in the country. From that victorious side, Cameron Delport, Ravi Bopara and, for the early stages, Dan Lawrence are lost from the batting line-up, while the bowling looks weaker with Adam Zampa, Mohammad Amir and Bopara’s absences.

Jimmy Neesham has arrived and the hope is he will be able to fill Bopara old brief - four overs of measly medium pace and explosive middle-order batting. His success could underpin Essex’s hopes of progressing to the quarter-finals. On paper, Essex look among the weaker sides in the South Group, but the same could have been said two years ago – and this is a county who just know how to win.

Key man: Colin Ingram – The hard-hitting South African has made Glamorgan his second home and after missing the Vitality Blast last year he will be keen to assert his authority on the competition again.

Flies under the radar: Timm van der Gugten – The Netherlands international has been Glamorgan’s leading wicket-taker in his past two Blast campaigns for the club. He’s in good form, claiming man-of-the-match honours in Holland’s opening ODI against Ireland this week after claiming four wickets in the most recent LV= Insurance County Championship match against Kent.

Best Player Under 24: Kiran Carlson – After bursting onto the scene as an 18-year-old it has been a bit of a slow burn for Carlson who offered a firm reminder of his class with a pair of twin tons against Sussex earlier this summer. He struggled in the Blast last year but it is surely a matter of time before he finds the consistency to make him a potent force in the Glamorgan middle order.

Blast expectations: Glamorgan have endured a tough time since reaching Finals Day four years ago, but there is reason for optimism as they aim to get back to the knockout stages. Glamorgan won three of their final four games last summer and their batting is boosted by the return of Colin Ingram. David Lloyd is back to full fitness, Marnus Labuschagne is set to be available for the entire group stage and young gun Kiran Carlson has shown signs he is ready to take the next steps in his career.

Key man: James Vince - After helping Sydney Sixers win the Australian Big Bash, the Hawks skipper will be desperate to repeat that success on home soil.

Flies under the radar: Ian Holland – The American-born, Australian all-rounder has been in fine form with the bat in the LV = Insurance County Championship and is a decent but unheralded seam bowler.

Best player under 24: Tom Prest - The hugely exciting 18-year-old batsman could be given the chance to transfer his prolific 2nd XI form – where he scored a triple century last month – to the Blast.

Blast expectations: After a bitterly disappointing 2020 season that produced just two wins from 10 matches and a last-placed group finish, the newly-rebranded Hawks will be confident of a much-improved campaign as they look to win a third Blast title. Big-hitting opener Short should deliver runs at the top of the order and canny all-rounder de Grandhomme control and accuracy with the ball. With Crane, Vince, Fuller and Liam Dawson in their ranks, few teams boast a more balanced squad. If everything clicks, there’s every reason to believe the 2010 and 2012 winners will be contenders for a Finals Day spot.

Key man: Mohammed Amir - His availability could be an issue, but Amir potentially gives Kent something they’ve lacked all season: a genuine strike threat and the capacity to generate fear in batsmen.

Flies under the radar: Jack Leaning - The third-highest scorer last time out, he took four for 16 in a second XI warm-up against Essex and after a tough start seems to be improving with every week.

Best Player Under 24: Ollie Robinson - Hopes are high for Tawanda Muyeye, but Robinson has been the brightest spark on and off the field so far, embracing the chance to open in red ball cricket.

Blast expectations: The switch to the white-ball will come as a relief for a side bottom of their LV= Insurance County Championship group, despite Walker’s pre-season statement that this was the most excited he’d been about a group of players for a long time. A two-day defeat in Cardiff aside, Kent haven’t been abject, but they’ve never really been close to winning either. Amir should address the obvious lack of firepower and there’s talk of a recall for Darren Stevens in the wake of his unhinged 190 against Glamorgan at Canterbury. The 45-year-old hasn’t played T20 for two years, but brings the kind of experience that might just see the Spitfires over the line, having hit the winning runs when Kent won the tournament in 2007 – the last time the county lifted a trophy.

Key man: Stevie Eskinazi - With Morgan and Stirling only available for the opening stages, Middlesex will look to Eskinazi to embrace the freedom to play his shots and repeat last year’s sparkling form.

Flies under the radar: Nathan Sowter - Leg-spinner Sowter may attract few headlines but has become one of Middlesex’s most consistent T20 wicket takers and helped propel his side to the quarter finals in 2019.

Best Player Under 24: Luke Hollman - Another leg-spinner, Hollman made his first-team debut in the Vitality Blast in 2019, impressing with bat and ball. Useful contributions in the Championship since have further underlined his potential.

Blast expectations: While Middlesex have underperformed in the Blast, this year’s tournament will be a welcome switch in formats after a poor start to their Championship campaign. England white ball captain Eoin Morgan returns as skipper and bolsters a brittle batting line-up alongside explosive Ireland opener Paul Stirling. Power-hitting New Zealand all-rounder Daryl Mitchell joins for the final group games, but the challenge for the rest of the batters is whether they can post competitive totals consistently once Morgan and Stirling resume international duties.

Otherwise, Middlesex again have a largely youthful feel. The Seaxes will hope these promising youngsters can kick on after being given an extended run over the last year. Spin could play a decisive role with several slow bowling options available, including experienced leg-spinner Nathan Sowter, Afghanistan’s Mujeeb Ur Rahman who has risen to number five in the world rankings since his last stint at Lord’s and Sydney Thunder off-spinning all-rounder Chris Green.

Key man: Lewis Gregory – Somerset’s T20 skipper is capable of blasting quick runs at the end of an innings and taking key wickets, both as an opening bowler and at the death.

Flies under the radar: Max Waller – Having developed into a specialist T20 bowler, the economical leg-spinner often opens the attack and can pin batsmen down with his variety of delivery and subtle changes of pace.

Blast expectations: Director of cricket Andy Hurry and head coach Jason Kerr make no secret of expecting to win every competition their team enter. This season’s Blast is no exception. But Somerset have won only ten of 24 group matches over the past two seasons, failing to reach Finals Day since 2018, and will need a much greater degree of consistency to stand any chance of lifting the trophy.

Only Tom Abell and Babar Azam scored more than 200 runs in last season’s group stage and Somerset will need some of their young guns - Tom Banton, Tom Lammonby, Lewis Goldsworthy and Will Smeed - to build on some hugely promising performances. Skipper Lewis Gregory and Craig Overton will look to lead the way with the ball, aided by the ultra-consistent Max Waller, while Roelof van der Merwe’s all-round skills, including those of a superb fielder, will again be key to hopes of success.

Key man: Will Jacks – The talented 22-year-old had a standout Blast last year, hitting 309 runs at a strike rate of almost 150 and taking 13 wickets with his off spin at only 16 runs apiece and an impressive economy rate of 6.46.

Flies under the radar: Evans – Now 33, the former Warwickshire and Sussex batsman returned to his native Surrey last year and has quietly built a fine white-ball record, with 3,624 career T20 runs.

Best Player Under 24: Sam Curran and Ollie Pope – Difficult to choose between these two gifted homegrown cricketers, both already established Test players. Surrey fans will be especially keen to see Pope’s magical strokeplay throughout the competition if he doesn’t make England’s white-ball teams.

Blast expectations: Very high. Beaten by Nottinghamshire Outlaws in the floodlit final at a dew-soaked Edgbaston on October 4 last year, Surrey’s squad now looks even stronger – particularly in the early games when their England white-ball players Jason Roy, Reece Topley and the Curran brothers are available.

Key man: Rashid Khan - The Afghanistan leg-spinner is back for his third season, having taken 24 wickets in 20 games. With Danny Briggs gone, his control and wicket-taking potential will be vital.

Flies under the radar: George Garton – He was outstanding in 2020 with 14 wickets and the best economy rate of Sussex’s seamers. He took 20 off a Steve Finn over to beat Middlesex and underline his batting potential.

Best Player Under 24: Delray Rawlins – The all-rounder is an explosive batsman who scores quickly anywhere in the top five while his left-arm spin could be handy, especially on used, dry pitches.

Blast expectations: Sussex look to have all bases covered and it will be a big surprise if the 2018 finalists don’t at least get to the knockout stages. Even at 36, skipper Luke Wright still has a lot to offer and commands enviable resources, even without Jofra Archer and with Chris Jordan’s appearances likely to be limited by England commitments. The mercurially talented Rashid Khan can be relied on to win a game or two on his own, Travis Head will bring runs and big-match experience and Ravi Bopara is too good a player not to improve on a disappointing 2020. It’s hard to see many opportunities for the youngsters Sussex have blooded in the Championship, although off-spinner Jack Carson might get his chance. Coach James Kirtley has promised a more analytical and innovative approach and it will be fascinating to see what this will mean. 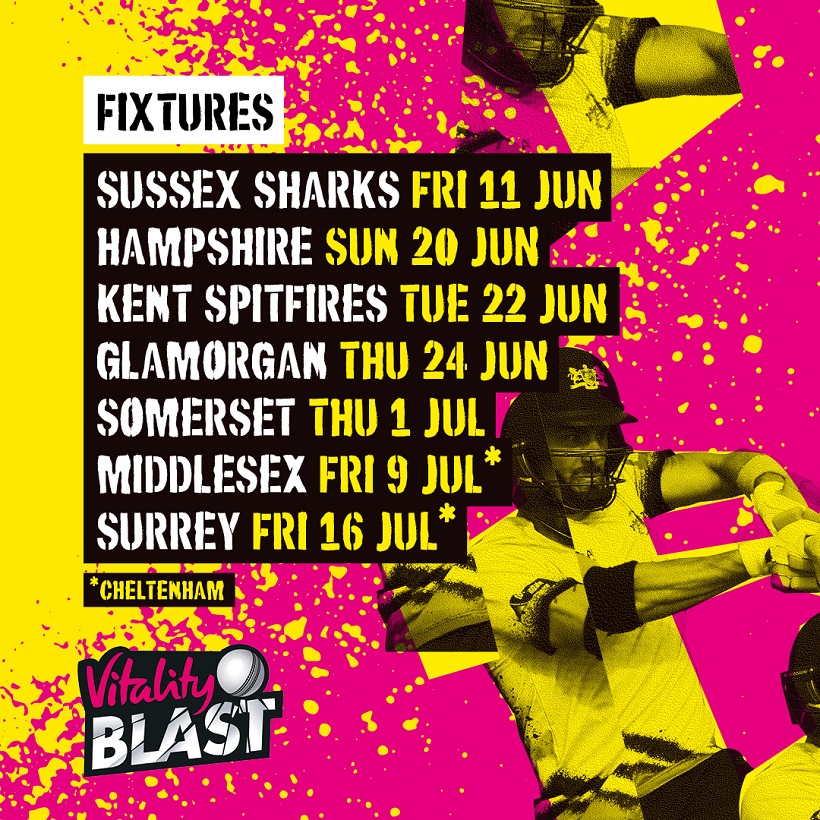